Sabrina Online is a webcomic created by artist Eric W. Schwartz following the life of a female skunk named Sabrina. 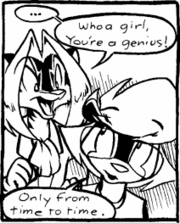 Sabrina Online was one of the best-known furry comics - as well as one of the longest-run webcomics of any genre. The strip ran uninterrupted for 20 years to the day, from September 15th of 1996, through the same date in 2016. Updates were posted within a few days of the beginning of each month, usually comprising four black-and-white strips. Occasionally an extra strip would be included, such as every Christmas, and special occasions (like every 100th strip) would be done in color. The comic has given birth to several fan projects in the SabrinaVerse, including Sabrina Online: The Story and the Sabrina Online Radio Play.

Sabrina is a computer geek who works at the Double Z pornography studio as a graphics designer. Despite her workplace, Sabrina is shy and does not get involved in the videos outside of making the VHS and DVD covers, no matter how much her employer Zig Zag may wish otherwise.

The plot follows Sabrina through her life in general, and her trials, most of which are social in nature. Her relations with the other cast members can at times turn humorous, such as when her employer drops in to cause her own unique brand of trouble which usually involves some flirtatious efforts to get Sabrina into a more "active" lifestyle - by Zig Zag's way of thinking, anyway.

Sabrina was initially an apartment roommate with Amy. This arrangement evolved into a family-friend relationship after Amy married Thomas (but not before giving birth to little Timmy).

Eventually, Sabrina finds a boyfriend, and one thing leads another, which leads to the bed, in an awkward yet humorous set of strips. Zig Zag observes Sabrina's behavior the next day and adds even more comical material when she practically makes a scene of her "women's intuition", much to Sabrina's embarrassment. In Strip 163, it is revealed that Sabrina lives in Columbus, Ohio, and R.C. Raccoon lives in Springfield, Ohio. They discovered this after both driving an hour each to meet each other at Midwestcon in Cincinnati.

Eventually, She and R.C. moved into an apartment together, which left Thomas and Amy to search for jobs themselves.. From there on, they would have a few minor arguments, which lead to R.C. finally proposing to Sabrina. This puts her into a daze, imagining a future 15 years later, where she still works for Zig Zag and has a daughter with R.C. When she snaps out of her daze (after 5 months of comics), she accepts. They have a small wedding soon after, and the comic ends with Sabrina getting pregnant, as a nod to "the first year".

Situations in the comic did not involve on-camera violence or sex scenes, only light swearing. It does contain "tasteful" nudity (no showing genitals or nipples, they are hidden by fur) and some comical mischief. This is never more accurately depicted than in the fact that Sabrina is never seen wearing normal pants. However, she does seem to wear what appear to be tights, yoga pants, or something similar, that look like her naked lower half (depicted in the strips published in September of 1998). This appears to be accepted without comment by all, including Sabrina's younger sister - presumably, others do the same.

The comic originally ended at one point on September 15, 2016. With Patreon, the comic was able to continue.

As of January 2017, The story of Sabrina Online has been continued in Sabrina Online - Baby Steps, beginning late in the pregnancy implied at the end of the original story. While the comic is included in the same archives as the original, it is now presented in a full-page, full-color comic format.

A Sabrina Online strip from 1999 also references furry fanatics. Having just met her online boyfriend, RC, Sabrina says, "I'm just happy you didn't turn out to be some disgusting old creep." RC: "Or a ten-year-old kid." Sabrina: "Or a fur fan" (sic). (The strip is at the top of this archive page.)