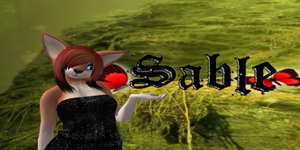 Sable Bamaisin(Subtakari Resident) is a female fox in the virtual world Second Life. She's the daugher of Sage & Rycon Bamaisin, and a member of Team Fox Star for RFL/American Cancer Society. She was also the owner of Sable Photography when it was on the mainland but closed due to inactivity. Sable is also the owner of Equinox Shores with her mother, and Brooklyn Kennels with her father until Brooklyn Kennels closed in 2014, also due to inactivity.