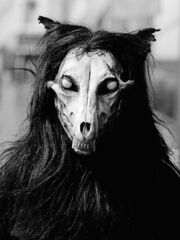 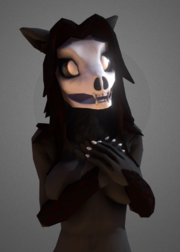 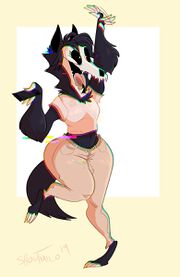 SCP-1471, also known as MalO ver1.0.0, is a 9.8MB freeware application for mobile devices, currently held by the SCP (Secure, Contain, Protect and Special Containment Procedures) Foundation. The SCP Foundation was responsible for locating and containing this object (now referred to as a SCPs), as it violated set natural laws.

SCP-1471 has no listed developer and is somehow able to bypass the application approval process to go directly to distribution. SCP-1471 is also able to avoid removal by other program manager applications.

After SCP-1471 is installed, no icons or shortcuts are created for the application. SCP-1471 will then begin to send the target individual images (video or still) through text messaging every 3-6 hours. All images will contain SCP-1471-A, either within the background or foreground.

Individuals with 90 or more hours of exposure to these continuous images will begin to briefly visualize SCP-1471-A within their peripheral vision, reflective surfaces, or a combination of the two. Continued exposure to SCP-1471 after this point will cause irreversible and sustained visualizations of SCP-1471-A.

Individuals at this stage have reported periodic attempts made by SCP-1471-A to visually communicate with them, but fail to understand or comprehend these actions.[1] Currently, the only known treatment to reverse SCP-1471's effect is to eliminate the individual's visual exposure to these images prior to 90 hours after installation. To date, no apparent hostile activity has been reported regarding SCP-1471-A.

SCP-1471-A, also known as MalO or MalO Calloway,[citation needed] is an Euclid categorized female humanoid being that appears to be a large and lycanthropic creature with a canid-like skull and black hair. It appears to have a furry body and long hair, while her head appears to look like a wolf's skull. It has a massive jaw and sharp teeth, while its eyes are milky white with no visible pupils.

So far, there has been no known information about SCP-1471-A to depict if it is evil or not. It has shown no hostile actions to test subjects, whatsoever. We cannot infer if SCP-1471-A is good either, due to its actions being undecipherable, even by the SCP scientists.

SCP-1471-A communicates with victims of the MalO app through the use of hand signals. Communication back with it is possible, though it is not currently understood quite what it means.

SCP-1471-A has become quite a popular character concept within the furry fandom. The character became a popular subject of the furry community of DeviantArt, Fur Affinity, and other websites, with notable examples gathered in the /r/SCPorn subreddit.[2]

SCP-1471-A is based on a costume named Breynz the Zombie Werewolf,[5] created by the professional American costume designer known as Qarrezel, with the first picture of the costume appearing on DeviantArt. It was worn by the female American model, Tarangryph.