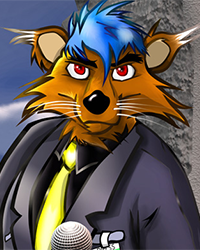 S-Config (born June 22, 1977), also known as just S, or Riot Ornitz on Second Life, is a furry artist who lives in the vicinity of Milwaukee, Wisconsin, USA.

S-Config has been in the fandom since 1992. He originally got into it though an interest in underground press comics looking and supporting stories and animation that would disrupt the established mainstream media. Like most things in life it didn't go as planned.

S-Config's first official furry convention was ConFurence 8, before which he had attended many science fiction conventions.

Currently, S-Config is a Male Binturong approximately 5'9" who works as a reporter in the future known as the "After-Now". Whenever possible S enjoys the finer things of humanity such as nice clothing wearing things like business suits and glasses may be common for him. And having them custom fit to keep tail, feet and hands moving freely as he works.

Although things like clothing is not really required. It's something nostalgic of the old world yet also something to look forward to. S likes to believe that the suit regardless of form doesn't make the fur. But the fur still has the duty to shine brighter then any textile he or she wears.

As an amateur artist, S-Config likes to work with digital media while doing the occasional analog sketch, and ink work as well.

S-Config has also done some minor 3-d mod work for games such as Stepmania, bringing anthropomorphic dancers in.