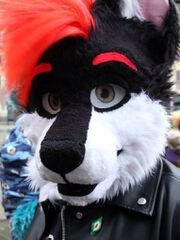 Séamus is of Irish heritage, his last name Ó Tuathail (In English O'Toole) meaning "Mighty" or "Mighty people". His family hailing from County Wicklow. Séamus is a bubbly, friendly, energetic, kind, loyal wolf who always makes time for his friends and family.

Séamus hobbies and interests induced Martial arts, he is currently an Orange belt in Karate. Sports such as Football, Rugby, Hurling and Gaelic football. Seamus will in the near future be joining a local LGBT team in his city, the Bristol City Panthers. Séamus is also into weightlifting and goes to the gym around 5 days a week.

Séamus first found out about the fandom in 2010 and went to his first furry convention in Dallas, Texas for the Texas Furry Fiesta in 2014. He normally attends the Bristol and Southampton furmeets and when he can also go to London and Manchester meets.

Séamus's fursona is a male black and white Eurasian wolf.

Séamus has two fursuits of his fursona. In 2015 he got his first suit, a toony suit from Bluefox Fursuits. In 2019 Séamus got his second fursuit, a full realistic suit, from Komickrazi Studios.