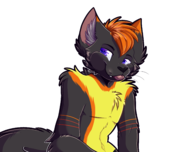 Ryker122, also known as cjdawg1993 (born September 25), is a British musician and actor who lives in the United Kingdom.

Between 2014 and 2019, Ryker was known to be in a relationship with then furry writer and digital artist Vickyt1279, who notably wrote the poem "To what, to where" in the midst of their partnership.

Although it still remains unclear what his sona truly is and the meaning behind it, he currently portrays himself under a feline fursona believed to be a domestic house cat, actually a type of wingless bat, with a mixture of black, orange and yellow fur. Ryker has since expressed an interest in changing it to suit himself better but he has yet to fulfill this aspiration. As it stands, his fursona has not changed since 2013 and has remained the exact same as it was when it was first conceived. In a 2016 interview with LIME, Ryker claims to have chosen his fursona through his personality, claiming it "Expresses who I am as a person. Mischievous, lazy and just overall charming, just like a cat".

Ryker122 is known predominantly from his multiple remixes of chart songs over the past decade and his performance in Drop Everything, a 2017 short film in which he plays Damian Garland.

Ryker began his musical career in late 2012, releasing "Breakdown" under the alias "Diablobuster". Although this never took off, he perused the ambition further, signing a deal with BTTZ Records in 2014 and becoming the youngest furry artist to release a song with more than 1000 plays on Spotify within a fortnight, being only 14 years old at the time. By 2015, he had made a name for himself through his many remixes of popular songs and releasing them through the record label. In early 2017, Ryker began collaborating with another artist known simply as WL Music or WETi, in which they would collaboratively release tracks under the BTTZ label. His Soundcloud was later shut down that year after he decided that creating music and distributing it isn't what he intended and that he would rather just create it for personal purposes. The 2018 remix of "Know" by KRM featuring WL sparked huge interest from fans globally, however, amassing almost 200,000 plays on the WL Music Soundcloud alone and later being featured on the official Spotify account for KRM and WETi.