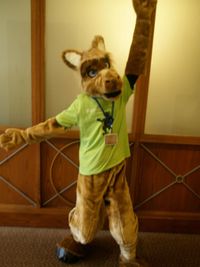 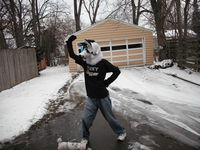 Rusticdragon20 (born November 29, 1986) is a fursuiter and writer from Michigan, U.S.A. He is better known by his fursona, Thunder, a thoroughbred horse.

Thunder began getting interested in the furry fandom at age eight, but did not get actively involved until the creation of his Fur Affinity account in 2009. He attended his first convention in 2012, at Furry Connection North.

Thunder got his name from a writing.com interactive story he had written. After trying to think of a name for a horse in the story, a loud thunderclap made him think of the word "Thunder", and thus the name stuck.

Two of his closest friends on the fandom are ilbv who is a small Human who Thunder has taken into care as his little brother and JettAilchu his mate.

In 2011, Thunder and Jett became Mates and together they have six children.

The family all live together in Jett's Family Castle in Ireland. ilbv is the only Human and a constant snack.