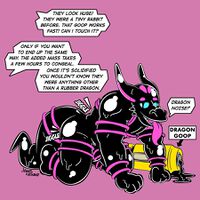 Rubber Dragons first appeared on Jackie Demon's Twitter page on April 8, 2020, with a screenshot of him and different colored rubber dragons avatars on VRChat being donned by users. He announced that it was a new 'line-up'. On April 26, the term "Rubber Dragon" was officially coined by Jackie and those interested in its creation. The same day, Jackie Demon uploaded the Rubber Dragon Zone world on VRChat that allowed users to become various colors of Rubber Dragons.

According to Jackie Demon, there is no lore associated with Rubber Dragons, but there are a few methods of transformation to become a Rubber Dragon. The first depicted method was coming into contact with black goop, which would slowly cover its target and begin a 'dronification' corruption process. Another way is by embracing a Rubber Dragon, also starting the drone process.

The Rubber Dragon Labs Butler was a concept conceived between Nyinxie and Jackie Demon for use within the VRChat world where Nyinxie would take the role of a Butler to 'Serve the needs of the labs', Ranging from janitor work to private shows within the private rooms of the World, inter-reactions being mostly NSFW in nature. The Rubber Dragon Labs Butler is one of the known positions of the community as Nyinxie has created quite a reputation. From Melting Rubber dragons in Rubber vats to simply piling up rubber Dragons to sit on. 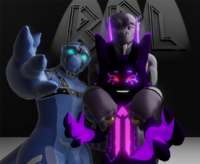