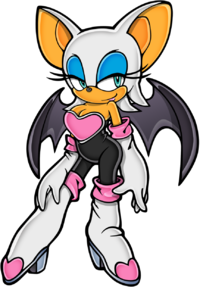 Rouge the Bat is a popular anthropomorphic fruit bat from the Sonic the Hedgehog video game series. She claims to be a treasure hunter, but is generally viewed as a jewelry thief.

Rouge is most known for being the only current and common female Sonic character to have an obvious sexual appeal, with the possible exception of Amy Rose; as such, her fanart tends to exaggerate her voluptuous shape even moreso than her official appearances.

In official media, Rouge appears on the outside to be independent and cold, and slightly vain. She has been shown at times to have compassion or pity, or even vulnerability.

Her taste for fine jewelry leads to disagreements with museums, and with Knuckles, who protects the Master Emerald.

In the general furry community, Rouge is often portrayed as a fleeting seductress, generally with extremely large breasts, who uses her raw sexual appeal with great liberty.

Common jokes, punchlines, or fetishes attributed to Rouge include: