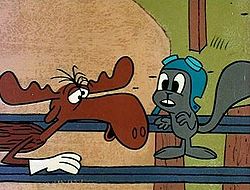 Rocky and Bullwinkle is a classic cartoon, starring a moose (Bullwinkle) and a flying squirrel (Rocky) and taking place in Frostbite Falls, Minnesota. The cartoon coined many of the classic, corny, slapstick cartoon jokes that are still common today.

A live-action film was released in 2000, but received poor reviews and was the subject of a Nostalgia Critic episode.