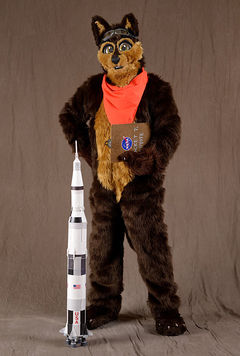 Rocket was created by a Civil Air Patrol senior officer in 2007, and made his first appearance as a fursuit character in 2008. Rocket's passion is model rocketry and he has built quite an impressive fleet. He shows them off in demonstrations provided to CAP cadets and adult members, also to newspaper and television news people. Sometimes he even launches model rockets while suited.

Mr. Coyote joins in military formations, staff meetings, sick bay visits, and presenting the gold lawn dart to deserving cadets during the encampment. He has also been a presenter at Furry Connection North 2010.[citation needed] Rocket may be the only other fursuiter in Civil Air Patrol, aside from Cappy the Eagle.

Rocket has appeared in annual mid-Michigan parades in support of CAP units such as the Bay City Saint Patrick's Day Parade and the Caro Pumpkin Festival Parade since 2008. He has appeared at the Tuscola County Fair (Michigan) and Caro Airport Fly-In (2010). He has also appeared at the Michigan Renaissance Festival with other fursuiters since 2009.

Rocket was honored by the 2013 CAP Public Affairs Officer Academy IV as one of two Michigan recipients of the Major Howell Balsem Public Affairs Award in Events category. He recieved a certificate and a unique challenge coin. At the 2013 MI Wing Summer Encampment, the Rocket T. Coyote 2.0 fursuit made it's debut. A full suit created by Silverluna Timberwolf on commission. The 2.0 version has also appeared in fursuit parades at Great Lakes Furry Con 2014 and Motor City Furry Convention 2014.

Being an avid model rocketeer, he was present during the 2014 National Sport Lauch held Memorial Day weekend near Muskegon, MI. Rocket reported to the range officials and was permitted to load a model onto the low-power array for a successful launch. The papercraft Black Brandt II landed in a drainage ditch over 100 yards from the rangehead, but the coyote managed to fetch his now-ruined rocket to salvage the parachute.

As ScarletPelt, he appears from time to time on White Pony's Cross Time Cafe webcomic. He is a technician and tinkerer who fills in as a chef. As the only coyote on staff, he gets a fair amount of play by the various contributing artists.

In Spring 2010, he made an appearance in Ralph Hayes, Jr.'s webcomic, Nip and Tuck. In March 2013, he also appeared in Kathy Kellogg's webcomic, Carry On.