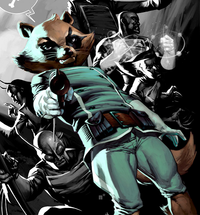 Rocket Raccoon is a fictional character, a superhero who appears in comic books published by Marvel Comics. Created by writer Bill Mantlo and artist Keith Giffen, the character first appeared in Marvel Preview #7 (Summer 1976). He is an intelligent, anthropomorphic raccoon, who is an expert marksman and master tactician.

Rocket Raccoon appeared as a prominent member in the 2008 relaunch of the superhero team Guardians of the Galaxy. The character has appeared in several media adaptations as a member of that team, including animated television series, toys, and video games. He also appears in the 2014 live-action adaptation of the comic of the same name, where he was performed and voiced by Bradley Cooper.

The character was created by Bill Mantlo and Keith Giffen and consciously inspired by the classic Beatles song "Rocky Raccoon"[1] which included a reference to "Gideon's Bible" (in the comic book limited series it was a book that contained the sum of all knowledge on the "loony colony").

Rocket Raccoon first appeared in Marvel Preview #7 (Summer 1976), in the back-up feature The Sword in the Star.[2] He subsequently appeared in The Incredible Hulk #271 (May 1982). In 1985, he received his own four-issue limited series (in an afterword to the first issue, Mantlo himself asserted that this was the same character seen in Preview), penciled by Mike Mignola and inked by Al Gordon with Al Milgrom. Rocket appeared in a 1990 issue of Quasar (#15); he later appeared in three issues of She-Hulk in 1992 (#44-46) as a prisoner on a Skrull ship.

During Peter David's run on the Hulk series, Hulk went into space and David addressed reader requests for Rocket's reappearance by implying that he had been killed by the aliens known as the Troyjans, who had a pelt mounted on the wall that looked like Rocket's.[3]

Rocket Raccoon was seen again in 2007's Annihilation: Conquest and Annihilation: Conquest - Star-Lord limited series,[4] and their spin-off series, a new volume of Guardians of the Galaxy. He remained a regular member of the series cast until it was canceled with #25 in 2010, also appearing in the follow-up limited series The Thanos Imperative. Along with fellow Guardian Groot, Rocket starred in backup features in Annihilators #1-4 (Mar-Jun 2011) and Annihilators: Earthfall #1-4 (Sept-Dec 2011).

Rocket Raccoon, along with the other members of the Guardians, appeared in issues #4-8 of Avengers Assemble,[5] a series intended as a jumping-on point for fans of the film The Avengers.[6] He will star in Guardians of the Galaxy vol. 3, a part of the Marvel NOW! relaunch.[7] 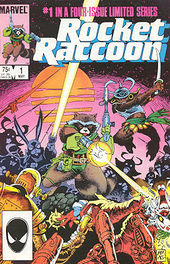 Rocket Raccoon acts as the "Guardian of the Keystone Quadrant", an area of outer space sealed off from the rest of the cosmos by the so-called Galacian Wall. Rocket is captain of the starship Rack 'n' Ruin, and he and his first mate Wal Russ (a talking walrus) come from the planet Halfworld, in the Keystone Quadrant, an abandoned colony for the mentally ill where the animal companions were genetically manipulated to grant them human level intelligence and bipedal body construction for many to become caretakers of the inmates. Rocket was Halfworld's chief law officer ("ranger") who protected the colony against various threats.[8]

At one point, Judson Jakes tried to steal the Halfworld Bible, but was thwarted by Rocket and the Hulk.[8] Later, Lord Dyvyne abducted Rocket's friend Lylla, and Jakes began the Toy War.[9] As the Toy War continued, Blackjack O'Hare teamed up with Rocket, and Rocket was reunited with Lylla.[10] The Rack 'n' Ruin was soon destroyed, as Judson Jakes and Lord Dyvyne teamed up to kill Rocket Raccoon.[11] Rocket Raccoon and his friends cured the Loonies of their mental illnesses, as Judson Jakes and Lord Dyvyne were apparently killed. Rocket and the animals and the robots left Halfworld and took off into space for their own adventures.[12] Some time later, Rocket was revealed to have been a laboratory subject on the Stranger's planet, and escaped his captivity there.[13]

Rocket Raccoon resurfaced as a member of the team chosen to accompany Star-Lord on his mission to stop a Phalanx infiltration of the Kree homeworld.[14] Rocket is depicted as a gifted military tactician who is also fearless, loyal, and insightful. It is also heavily implied that he has a case of obsessive compulsive disorder.[15] Rocket's trademark rocket skates are absent.[14]

Rocket joins the new Guardians of the Galaxy at the behest of his friend Star-Lord.[16] It is he who suggests that the team adopt that moniker after hearing it mentioned by Major Victory.[17] Later on, when the team almost disbands and Peter Quill disappears (sent into the Negative Zone by Ronan), Rocket keeps the team alive, and brings in Groot as member, as the two had become firm friends.[18] Rocket takes over as leader until they rescue Peter, and save the Earth from an alien invasion.[19] When the team tries to halt the growing War of Kings, Rocket decides to lead the portion of the team assigned to make contact with the Shi'ar. However, they are unable to teleport into the Emperor Vulcan's flagship and have to be rescued by the Starjammers and Rocket's old friend Ch'od.[20] They are able to bring back the rightful queen of the Shi'ar, but she's killed once Rocket had departed, much to his horror.[21]

After the Guardians disband,[22] Rocket Raccoon takes up a normal job with Timely Inc.[23] He and Groot were reunited and tricked into returning to Halfworld: here, he found out his memories of the place were mostly half-truths and deliberately crafted fake memories. In reality, Jakes and Blackjack O'Hare had worked with Rocket in providing security at Halfworld Asylum for the Criminally Insane; Doctor Dyvyne had been Head of Psychology there; and both the anthropomorphic animals and the automaton clowns were deliberately created to work at the asylum, as their appearance would calm the inmates. The crises that Rocket half-remembered had been caused by the psychic supervillain the Star Thief, who had been admitted as an inmate and used his psychic powers to turn the inhabitants against each other. Rocket had turned the warders into a biological "key" to keep Star-Thief locked up, and deliberately altered his mind and left Halfworld so it could never be opened - but he was tricked into returning by the Thief, whose mind had escaped into the asylum after his host body died.[24]

Rocket Raccoon possesses the normal attributes of an Earth raccoon, including speed (which has been additionally amplified by his training) an acute sense of smell, sight, hearing and touch. He is an accomplished starship pilot, an excellent marksman with the two laser pistols he carries as well as having an affinity for heavy weapons. He is also an excellent military tactician and leader, attributes that help him take charge of the Guardians of the Galaxy when Starlord is unavailable. 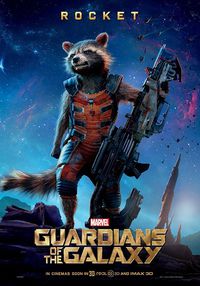