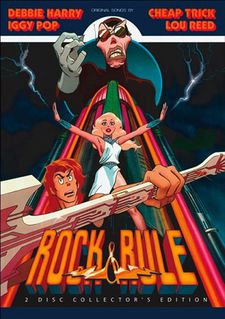 Rock & Rule is an animated 1983 science fiction/fantasy film from the Canadian animation studio Nelvana. The first full-length animated feature to be produced entirely in Canada, the film features state of the art animation[clarify] and furry characters.

The film focuses on the fictional rock band Drats! - the main characters being anthropomorphic dogs, cats, and rats. With heavy emphasis on rock music, the film is nearly a musical, including songs by Lou Reed, Iggy Pop, Cheap Trick, Debbie Harry of Blondie, and Earth, Wind & Fire.

Two versions of the film exist, one longer Canadian Broadcast Corporation version with the original voice of Omar, the other a slightly shorter edit from MGM for US release with Omar's voice redone. Produced in a time when adults didn't much go for animation, the films references to, and muted depictions of sex, drug use, demon worship and violence ensured it had to be marketed to an older audience and therefore, caused box office disaster. Inspiration for the film came from the animated TV special The Devil and Daniel Mouse.

Omar, Angel, Dizzy, and Stretch perform in a small-time rock band in their home city of Ohmtown. The aging but still popular rock star Mok, in search of the "one voice" needed to summon a demon from another dimension, hears Angel sing while the band performs in a club and realises that she is the voice he needs. Although initially unaware of Mok's true intentions, she refuses to abandon her band at his insistence. Not willing to take no for an answer, Mok kidnaps her and flies away with her in his blimp to Nuke York (the post-apocalyptic version of New York City) to perform the concert that will summon his demon.

Omar, Dizzy, and Stretch follow in a stolen police car to rescue their friend (and Omar's love interest). Meanwhile, Angel attempts to escape and in the process, learns of Mok's horrific goal and his confidence in his success considering that there apparently is there "no one" capable of stopping his summoning. Unfortunately, Mok soon recaptures Angel and uses an impersonator to fool Omar in thinking that she is spurning him willingly. To sway Angel, Mok then captures the band and tortures them in order to compel her to agree to his demands for their release, but not before brainwashing them into an addled state to ensure they would not interfere further.

When Mok's first attempt at "Carnage Hall" proves a destructive fiasco due to insufficient power, he is advised to move the summoning to Ohmtown, where the power plant has access to unlimited energy. In that second concert, there is a power surge that has to be drained into the town causing overloads, which both darken the city and shock Omar and his friends out of their stupor.

Dizzy and Stretch decide to try to stop the concert, but Omar initially refuses on account of Mok's deception. Although all three make their way to the event, they are unable to stop the summoning beyond freeing Angel from her restrains after it was too late. The demon starts consuming the audience and attempts to attack Omar who is saved by one of Mok's simple-minded minions who sacrifces himself. Desperately, Angel attempts to sing to force the demon to leave, but her voice has no effect as the demon advances to consume her. However, the situation dramatically changes when Omar begins to sing in harmony with Angel and the Demon is driven back through the portal. Mok realises too late that his computer's reference to "no one" did not mean an effective individual did not exist, but that the counterspell involved more than one person. As he ineffectually tries to stop the duo, the brother of the self sacrificing minion turns on Mok and throws him down the portal.

The concert ends with massive audience approval as the band is introduced as the newest superstar talent, with a wildly popular vocalist duo fronting it in the now sunny Ohmtown.

Rock & Rule , as an animated film, was many a young Canadian furry's introduction to sex, drugs, and rock 'n' roll, as well as the first glimpse of a more adult view on anthropomorphic chracters; beautifully drawn and somewhat complex characters that are quite non-cartoony, unDisney-like, and not at all like the usual Saturday morning kids stuff in their actions, words or noticeable sexiness.