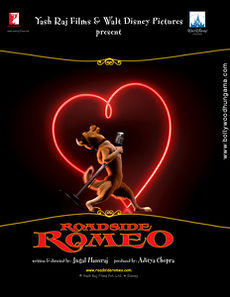 Roadside Romeo (Hindi: रोडसाइड रोमियो), is a 2008 computer-animated film produced by the Indian company Yash Raj Films in cooperation with the Walt Disney Company.[1] The film is spoken mostly in Hindi, but has some English thrown in.

Romeo, a dog who used to live the life, finds himself all alone on the streets of Mumbai. After making a few new friends he stumbles upon the love of his life; too bad the local gangster-boss has his eye on her as well...