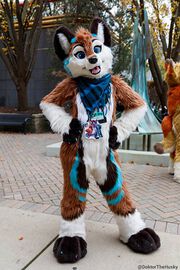 Rivalo Wolf also known as Rivalo (born October 25, 1993), is a fursuiter who lives in Phoenix, Arizona, USA, with Taiga Tracks.

Rivalo Wolf is active on Twitter and Instagram social media. She started being active on Instagram on December 20, 2016, following her Twitter debut in November 2015. She likes to play computer games, perform music and interact with other furries. She does programming as a career. She plays video games competitively and helped run an esports organization for several years. She also likes Anime and being mischievous. Her favorite food is sushi.

She enjoys a musical performance and has been playing the trumpet in various mediums since 2004. She enjoys a variety of furry convention venues, which she has been attending since 2012. She found the fandom through her love of cosplay and animals after having been exposed to other furries in the gaming scene. She doesn't have a Youtube channel nor plans to. She enjoys meeting people within the fandom whether it be online or at conventions. She loves the creative aspects of the fandom, with art and performance being her favorite parts to support.

Character performance was a major inspiration for Rivalo Wolf to get involved with the suiting aspect of the fandom. She thought that projecting through a physical character seemed like such a fun and creative outlet of expression, and she wanted to try to do a good job in making others happy as well. She doesn't have a goal in the fandom, persay, She'll be happy if she continues to meet and have fun times with the people in it, it's more just a hobby that she shared.

Rivalo Wolf have two fursonas known as Rivalo, a wolf, and Taz, a sabertooth tiger.