RivFur was a furmeet (for a time, a furry convention) that celebrates the furry genre. RivFur is held annually in August of each year in Brisbane, Queensland, Australia. The name "RivFur" is derived from the Brisbane River that sprawls through the centre of the city.

RivFur was founded by FlameDrake, Foxy Malone and Nikita Wolfpaw in 2007, with the purpose of bringing the local Brisbane furry community together each year for a small scale furmeet. Activities have included Laser Tag, Mini Golf, Bowling, Chocolate Making, Scavenger Hunts, Rock Climbing and River Cruises along with large group trips to popular local destinations such as Movie World, Dreamworld and Australia Zoo.

In August of 2012, the RivFur General Committee announced changes of the RivFur event format. This announcement confirmed that the event would be migrating from its large scale furmeet format to an official hotel based furry convention structure. The planning and organization responsibilities were officially passed onto Brisbane Furry Events (also known as just BFE), a registered Australian partnership formed by Brisbane furs Jet Dingo and Spex Wulf, to help fund, organize and run RivFur in its new convention format.

Until 2012, RivFur was always held in July of each year. RivFur 2012 was held June 29 to 1 July. Organizers announced in 2012 that RivFur 2013 and all future RivFur events would now be held in early August to allow a bigger gap between RivFur and The Furry Down Under Convention (FurDU) held on the Gold Coast in April.

Once again in 2016 the event is being ran as a FurMeet with a few of the events from previous events returning due to popular demand. The event has returned to its July timeslot, being held on the last weekend of July.

As of 2016, RivFur has been cancelled due to a lack of overall interest.[3] 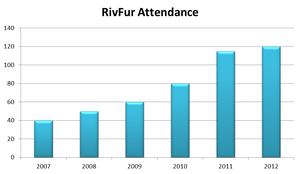 Although RivFur was directly funded by Brisbane Furry Events, a volunteer committee of furs who's role was to assist with the planning, running and execution of the event still operate directly under the partnership. This group was referred to as the RivFur General Committee (or RGC), and was staffed by both members of Brisbane Furry Events partnership and by volunteers within the Australian furry community.

The committee included Jet Dingo, Spex Wulf, Pistol Pup, Kidsune, Night and Lore_Darkclaw. The RivFur committee was dissolved at the conclusion of 2013. RivFur was run under the sole supervision of Kiba Swiftpaw from 2014 to 2015. At the conclusion of 2015's RivFur the event was handed over to Flicker and the team at South Bank Fur Meet to run under the supervision of Foxy Malone

RivFur has had a number of individuals contribute to the merchandise offered at each event. Funds raised from the sale of merchandise goes towards funding the event each year.