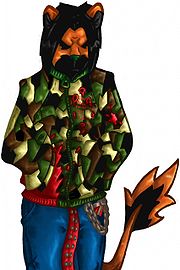 Riff-Raff's Fursona drawn by Riff-Raff herself.

Riff-Raff (born 1984) is a furry artist who lives in Hull in northern England, where she shares a flat with Vulpon Leo.

Although she had been interested in the fandom for a few years, she only began to fully take part in it in 2006. Her fursona is a lioness, although as of June, 2007, she is still in the stages of deciding on her final fursona.

Riff-Raff is one of the Hull Furs.

She produces a comic which is published online.[citation needed]

Riff-Raff is into comics and anime. She also likes rock nights and drinking.