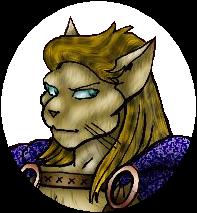 Rhudiprrt aka Rhudi (born July 29, 1963) is a furry who lives in Greenville, South Carolina, U.S.A. He moved back to Greenville, after living in Asheville, North Carolina for nearly 16 years. He was forced to move back for the job market and because his job evaporated due to textile imports. For a year-long period in 1975 he lived in Thailand.

His persona is borrowed from Rhudiprrt, Prince of Fur with permission from Dwight Decker, the author of the original Rhudiprrt comics, as long as the publisher (MU Press) didn't object. Rhudi has tried to honor the spirit of Rhudiprrt in his online behavior. Rhudiprrt's first on-line incarnation was on FurryMUCK in October of 1993.