Revo has been role-playing via the role-play community on Facebook since 2007, whereas his first character was a Leafeon Pokémon. 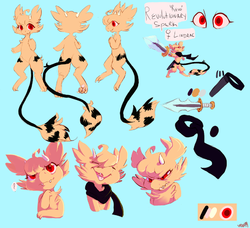 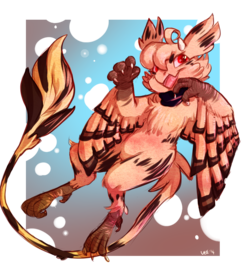 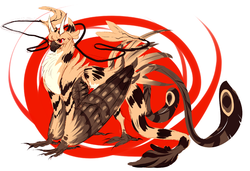 Revo joined the furry fandom in January 2008. He is an avid art commissioner. Revo was a SoFurry staff member for the site TeamSpeak voice-over-Internet Protocol (VoIP) service. from 2013 to 2014.[3] He also staffed as an Admin for the Furry Social networking site known as FurGather though resigned in 2017 [4]

A lindrac pronounced "Lin-Drake" is a small elemental dragon a hybrid of a Wyvern and a Hawk, these creatures start with a single base element that has to be mastered before being able to go into second state to gain a second attribute. The food they preference over is fish, they dislike most mammalian meat though they will eat fruits and mammals if no other food source can be found. the difference in forms are based on their level of mastery of their element starting with first state to evolve and to progress foward the lindrac must first master its basic element before gaining its second state in this form the mastery will be gained after mastering their secondary element to get into their elementary final state. A lindrac's colour pigment and markings are based on what element they are born with.

Primal Elements are the basic 5 elements that belong in this world Air, Earth, fire, water and lightning with the additional 2 primal being light and negative. there is also combination elements Dust, ice, scorch, blaze, magnet, crystal, explosion, storm, wood, lava and boil. these elements are a mix of the primal excluding the light and negative elements.

Being small, Revolutionary Spark is commonly underestimated with her abilities such as being a master blacksmith with her apprentice and building weapons to feed the masses who need them for defense. Now also being the Lieutenant Commander of Leurian Empire formerly known as D.E.M.O,(Dynamic Enforcement of Military Operations Founder being Sparky Electron a friend of Revo) she has the ability to command a large group of troops and train them in any way she wants though she never uses them and goes into battle alone.

Her blade, Kinsight Blade, was hand-forged by her own hand made from a mixture of antimatter and Obsidian for the core and the blade of crystal compound. A blade that is near indestructible though only being a prototype, it weighs more than a bus and can cut through anything

During this form, Revo sprouts wings, her beak growing firmer like a hawk's, her ears get less fluffy, and her body gains feathers going all the way down towards a feathered long tail. Around her neck is a D.E.M.O. branded collar that normally restricts her from going into this form, but can be turned on to allow it with a turn of a dial. Her markings tip the feathers of her wings and on her ears, and her tail becomes fully yellow and black, as her hands and feet paws change into talons.

She does not use her blade in this form, relying instead on her speed, and whatever element she has chosen to punish her prey.

Orion is a male Jackalope with emerald-green eyes, his fur colour is of natural browns and other earthy colours. He is 4 feet 2 inches tall (1.269 meters) and weighs 84 pounds (38.10 Kilos). The clothing he wears a green tunic tied by a black thin belt with small trinkets hanging off it and wears a brownish red kerchief around his neck finishing off his outfit.