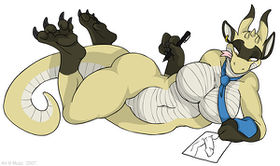 Rednef is Fur Affinity's secondary mascot, along with the site's main character, Fender.

Fender resumed his normal appearance after about one week.

The header was used as a placeholder for the newly released dark theme until May 2007, when FA announced[citation needed] that the female dragon was now a separate character from Fender, that the site would now have two mascots, and that the new dragon character would be named Rednef, "Fender" backward.

At the 2014 FA:United closing ceremonies, it was announced that Rednef would be made into a fursuit by Space Cat Creations.[citation needed]

The May 2007 banner was the first one to feature her as a de-facto official character. from then on, she appeared/was featured on several themed banners, by herself or alongside Fender, until FA's banners were discontinued.