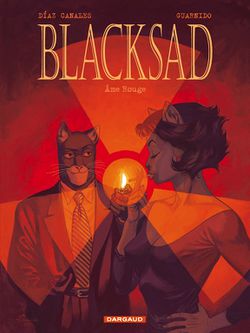 Red Soul (French: Âme Rouge) is the third installment of the Blacksad series of graphic novels. It was published in 2005 by Dargaud for the French-language market, but a single English-language translation has not been published due to the bankruptcy of iBooks (which had followed the 2005 death of its founder, Byron Preiss), which had published the first two English translations. Instead, the English was released within a single collection of the first three Blacksad books by Dark Horse Comics in October 2010, a month after the fourth installation, Hell, Silence, was published in September for the French-language market.

Is based firmly shortly before the Red Scare, Blacksad is employed as a bodyguard for a rich old tortoise called Hewitt Mandeline, whom he met while on a gambling trip to Las Vegas (the book's second cover repeats the previous book's third cover, where Blacksad scatters Cotten's ashes to the wind). After returning home, Blacksad's last assignment is to accompany him to an art gallery, where he meets his commissary friend Smirnov with his family. He finds a leaflet for An Energy for Peace, a lecture given by his old school teacher, Otto Liebber (an owl) a nuclear physician and Nobel Prize candidate, supported by the rich, young, dynamic, idle communist Samuel Gotfield (a dalmatian) and his titular scientific research foundation.

However, all is not going well for Liebber and the Gotfield Foundation; the lecture hall is mobbed by anti-communist rioters and Blacksad takes an instant dislike for Gotfield, who makes a mockery of the lecture. He also meets Gotfield's fiancee, writer Alma Mayer, who reacts frostily to him. Gotfield invites him to a party at his luxurious coastal mansion where Blacksad meets the so-called 'Twelve Apostles' - twelve Leftist intellectuals who gather near Gotfield for protection from the Witch Hunt: Greenberg, a beat poet, photographer Dora, Klein the sculptor, actor Bill Ratcliff and scriptwriter Jess Logan, Russian painter Sergei Litvak, accomplished chemist Laszlo Herzl and Ms. Mayer herself. After Blacksad grudgingly saves a drunken Gotfield from drowning, with the help of Liebber's close friend Otero, Herzl angrily accuses Liebber of promoting nuclear weapons, ending the 'party' on a poor note. When Otero gets back home wearing Liebber's hat, he is killed by a mysterious gavial assassin. It seems he actually meant to kill Liebber.

Blacksad and Alma - who will soon marry Gotfield, planning on a honeymoon to Niagara Falls—begin to have feelings for each other. Blacksad decides to become Liebber's 'Guardian Angel', following him and observing him. Soon he saves Liebber from a car bomb, planted at a garage entrance by the same gavial, but despite a destructive leap through a pane of glass and brutal hand-to-hand combat, he fails to stop the goon from escaping and Liebber disappears from the scene leaving just a wrecked DeSoto.

From Smirnov, Blacksad learns that the gavial is a highly-regarded hit man known as Ribs, and that his bomb was uncharacteristically chemically complex. Suspecting that Herzl the chemist might have hired Ribs to kill Liebber out of professional jealousy, Blacksad confronts Herzl. To his surprise, Herzl is a Holocaust survivor and Nazi hunter, who shows him photographic proof that Liebber used to work for the Third Reich - thus why he may have hired Ribs and provided him with a bomb.

Stricken with this new information, Blacksad seeks solace from Alma, but before they can meet, the FBI arrests her and other Apostles as communists, betrayed by Gotfield - pressurized by senator Gallo into babbling on his protégés in exchange for a seat in a special anti-atomic bunker. When the FBI agents visit Litvak in his art studio, they accidentally kill him after injecting him with truth serum to try and find out where Liebber is. Liebber, meanwhile, has returned to his old neighbourhood (where Blacksad also grew up), only to find it overcome by poverty and his father's church in ruins. Suffering a personal crisis, Liebber hides at the city aquarium, where Blacksad once hid as a child.

Blacksad intercepts the FBI agents before they take Alma away and rescues her, taking shelter in Weekly's apartment. Falling in love with Alma, Blacksad promises to take her to Niagara Falls, which none of her previous husbands ever managed to do, and which to her is an important act of commitment. Blacksad then finds a fatalistic Liebber at the aquarium. Liebber admits to a lifetime of failure, trying to improve the world and reduce suffering, only to make the wrong choices and leaving the world worse than before. His last sin was to follow Litvak's advice: that to maintain the balance of world peace, both Russia and the United States would need to have nuclear bombs - and Liebber has been supplying Litvak with the information for the Russians.

Hoping to minimize the damage, Blacksad visits Litvak's studio only to find his dead body. Realizing that Litvak had copied Liebber's information onto a canvas and then painted over it to disguise it as a work of art, Blacksad goes to the shipyards, where the painting has been loaded onto a boat bound for an art exhibition in East Berlin. It turns out Litvak had made two copies of the painting entitled "Red Soul", one of which would return to North America after the exhibition, while the other copy (containing Liebber's information) would remain behind for the Russians' nuclear program. Blacksad re-routes this painting to Australia.

As Blacksad prepares for his trip to Niagara Falls, the FBI agents arrest him and plant fake evidence to frame Blacksad for killing the painter. Senator Gallo himself interrogates Blacksad, trying to find out where Liebber is hiding. When Blacksad refuses to cooperate, Gallo points out that his fingerprints were found in Litvak's studio and that he is likely to die in the electric chair if he refuses to cooperate. Blacksad is then released.

Blacksad visits Gotfield to find out what made him betray his friends and move into Gallo's camp. Since Gotfield is rich, Blacksad deduces that Gallo must have offered him something money couldn't buy, and this turns out to be the case. Gotfield is now one of a selected group of people who will be evacuated to a special government shelter in the event of a nuclear war. The main criteria for selection is being a friend or supporter of Senator Gallo.

Finding a list of names along with a description of this plan (called 'Project Noah') in Gotfield's safe, Blacksad uses it to blackmail Gallo. Blacksad is not blamed for Litvak's death, and the government fakes Liebber's death and allows him to leave the country. Blacksad gives the list of names to Weekly in a sealed envelope, with instructions to publish the contents if anything happens to him.

The end of the comic is bittersweet. Liebber writes Blacksad a letter, explaining that he has returned to Germany where he is happy again, helping a community rebuild itself after the war, and is teaching children to read and write. Alma, who had been waiting at Niagara Falls, gives up on Blacksad after she reads the (fake) story in the newspaper that Liebber committed suicide after Blacksad turned him in. In her mind, Blacksad is now as much a traitor as Gotfield. Due to bureaucratic red tape, Blacksad was kept in custody for a couple of weeks; when he tries to find her again, she has vanished and her track has gone cold.