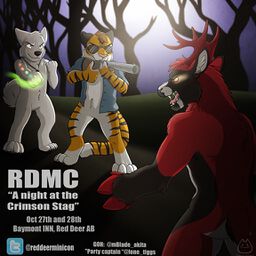 Red Deer Mini Con (promoted as "A Night at the Crimson Stag") was an 18+ furry convention held in Red Deer, Alberta, Canada. It has grown from a one-day Halloween event to 145 attendees in 2018. It is led by Jake Tiggy (Mark Jacobsen),[1] who had previous experience running events for the Northern Alberta Mascot Performers from February 2013.[2][3]

Due to COVID, the convention did not operate this year.

On July 27th, 2021, the official Red Deer Mini Con twitter account posted [1]a notice of farewell[/a], indicating the convention would not be returning.