This article is about the Brazilian furry. For the SWAT Kats character, see Jake "Razor" Clawson. 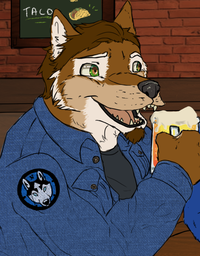 Razor Clawson is a Brazilian furry musician whose fursona is a wolfbear (a hybrid of wolf and bear). He was born on August 14, 1974, in the city of Curitiba, Paraná, Brazil, where he still lives.

Razor discovered the furry fandom in 2001 through the website Furry Brasil. His first public appearance was at Abando 2014 in March, 2014.

Razor is a singer, and has some songs with his former band, Survivors, available on Fur Affinity.

He also possesses some talents as a gourmet. Along with Psycho Talbain, he has a furry steakhouse in Curitiba, called "Toca do Lobo".