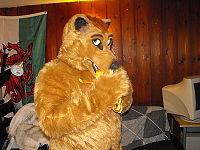 Razor is a Canadian fursuiter who resides in Calgary, Alberta. He is the owner of the Alberta Furries website.

Razor's fursona, which came into existence sometime around 2006 or earlier, is a brown bear with darker brown fur on his chest and beard. Razor does not wear any accessories or clothing on a regular basis, but when forced to wear clothing is usually seen in a T-shirt and pants (similar to those of his real life self).

Razor's bear fursuit was made by Noble Wolf. It was completed sometime around December 12, 2008.

Razor attends local conventions and meets/events when possible, and has gone to local comic and anime conventions to meet and socialize with furries as well as members of other fandoms. Events attended by Razor include:

In real life Razor enjoys hanging out with his friends and meeting new people, as well as working on his website. Razor is also a IT guy and enjoys video games, movies. He likes to have an all-round good time and enjoy life.