Rascals Goyoku is an action/comedy/fan service webcomic drawn and written by Mastergodai and soft brushed by Upstairstudios, which first began in 2011. Rascals Goyoku takes place prior to the events found within Rascals and centers on Skye’s journey to perfect his skills as a mixed martial artists and meeting Reiko. It is hosted on Petite Symphony and The Katbox. 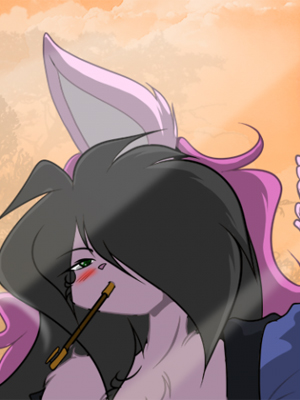 Skye chats with Quick on the phone about his first day overseas to train at the ninja academy. Quick mentions that he’ll be lonely since Skye is overseas and Liona has left after spending the night together. On his way to the ninja academy, Skye shows Quick all the lovely women on the street. He unfortunately is not paying attention and crashes into Reiko. After fishing his phone out of Reiko cleavage, Jazmin, Reiko’s younger sister, appears and scolds Reiko for exposing herself to Skye. Skye ignores her and huffs at Jazmin’s skirt to reveal her panties. Reiko claims that those are her panties and yells at Jazmin to take them off, which she vigorously declines as they’re in public. Skye offers to keep a watch over them, enraging Jazmin to the point that she performs a thrust kick and launches him away.

Yoro, an instructor at the ninja academy, surprises her class with a wall-walking jutsu pop quiz and calls upon Reiko to go first. Jazmin informed Yoro that Reiko skipped class when in reality she was attending to Skye in the nurse’s office. Yoro tells the class to study while Jazmin retrieves Reiko. Yoro meets with Koyo to attend to some business. Once finished, Kyoko prepares to jump out of the third floor window whenever she notices Sky sneaking around the girl’s bathing springs. Skye uses instant messaging to show Quick some of the lovely ladies enjoying the bathing springs. Kyoko snakes up on Skye with her sword drawn and orders him to turn around. Skye employs a replacement jutsu and slips into the trees. Unfortunately, Kyoko senses Skye in the trees. Skye comes down, but is in the nude as he has not truly mastered the replacement jutsu.

Meanwhile, Jazmin hits a perfect bullseye in her archery class. After Jazmin’s shot, her fellow female classmates forcefully pushes her into the shower so that they can bathe her.

Returning back to Skye, Kyoko finally recognizes him as Roarx’s son. Kyoko immediately turns to Ryu to show Skye around campus upon him mention her and his dad on their adventures back in the day. Skye assists Ryu in carrying the weights around the campus despite her not minding so as she carries these weights around campus seventeen times a day. They encounter T.J., Ryu’s rival at the ninja academy. During a brief scuffle between these two, Skye intentionally tilts his weight stack, causing one of them to fall off towards T.J.; however, T.J. manages to catch it with ease and then kick the other weights out of Skye’s hands and stacking them up flawlessly in midair, taunting and warning Skye to not mess with him. T.J. also manages to grope Ryu with his fast speed.

Jazmin finally finds Reiko resting in a tree and yells at her to come down and head to Sanaki’s class. Reiko initially brushes Jazmin off, stating that she can handle anything Sanaki throw at her. Reiko’s demeanor instantly changes upon Sanaki’s arrival. Sanaki decides to punish Reiko for skipping and insulting her class and Jazmin for being with Reiko at the wrong time. To give Reiko and Jazmin a sporting chance, Sanaki gives them a head start. Once hidden, Jazmin furiously scolds Reiko for dragging her into this mess yet again.

Close by, Nick walks with Yuriko, her sister, as she explains how she won’t work as hard as she did yesterday since she is now wearing a skirt. While Nick questions his own sanity, Reiko and Jazmin run on by and ask Nick to take care of Sanaki coming after them, resulting in him and Yuriko flying into the air. Sanaki taunts Reiko and Jazmin in that she can easily track them down. Kyoko appears and offers Sanaki lemon drops in exchange for leaving her daughters alone. Once Sanaki leaves, Reiko and Jazmin emerge from behind Kyoko, who punishes them both with scroll locker cleaning and meal duties for one week. Shocked, Jazmin angrily blames Reiko for this mess and leaves. Reiko tries to insult Kyoko about her age but quickly takes it back under her advisement.

With Reiko’s last comment, Kyoko reminisces about her antics in the ninja academy and how she was similar to Reiko. During her trip down memory lane, Kyoko recalls her and Sanaki sneaking into the facility store room to find the answers for the next exam but instead find a recipe for Chinese style steamed duck. At that precise moment, Olga barges in and grabs hold of Sanaki while Kyoko makes a run for it. Sanaki pleads with Olga to let her go, but she refuses and tells her that she should have gotten better company than that cowardly pink bunny with the large rack and wide buttocks. Angered, Kyoko confronts Olga, only to have second thoughts at facing such a massive opponent. Olga tosses Sanaki to the side and dashes toward Kyoko. Despite Olga’s superior strength, Kyoko uses her opponent’s weakness and bites Olga’s tail to inflict some damage. In retaliation, Olga throws Kyoko into the sky and watches her slam right into a wall. Flustered, Kyoko tries to regain her composure as Olga approaches. Before either one could make a move, Jin arrives and orders them both to report to the headmaster. While heading toward the head master, Kyoko and Olga have a friendly banter about the whole ordeal with Kyoko hinting that she could have exploited Olga’s large rack as a blind spot. Leena interrupts their conversation, scolding Olga for going too far in retrieving Kyoko and Kyoko for her childish antics. Leena then assigns them a mission to find Yoro, who was sent to escort the prime minister but hasn’t reported back yet. To insure success, Leena assigns Jin to go with them.

Out in the field, Kyoko and Olga continue to insult the other’s massive chest size, nearly distracting Jin. The group arrives to see a semi-truck in the middle of a field. The group move in closer and start to investigate the scene. Hearing thuds coming from inside the trailer, Kyoko opens the doors to find Yoro gaged and bound. Kyoko reaches for her kunai and frees Yoro. Yoro then yells that this is a trap.

An exchange student from the West, Skye is set to train at the ninja academy to hone his fighting skills as a mixed martial artist. While chatting with Quick over the phone and showing him the scenes, Skye bumps into Reiko and subsequently Jazmin. He is eventually launched into the air for his perverted nature. After a quick trip to the nurse’s office, Skye continues to taunt the women with a quick sneak peak in the woman’s bathing springs. Skye manages to slightly slip from Kyoko’s grip only to be spotted in the nude. With his mayhem over with, Skye properly introduces himself to Kyoko and takes a tour of the campus with her and then Ryu. Trying to impress Ryu, Skye tries to injury T.J. but fails miserably.

Reiko is Kyoko’s older daughter and Jazmin’s older sister. Reiko is quite opened with her body, inviting Skye to reach into her cleavage to obtain her phone. Despite her talented ninja skills, Reiko is also quite lethargic when it comes to her classes, skipping courses to hang out with men or sleeping. These two characteristics often get Reiko into trouble with her instructors and mother.

Jazmin is Kyoko’s younger daughter and Reiko’s younger sister. Unlike Reiko, Jazmine is reserved with her body and is quite active in her classes. In fact, all the women tend to pamper Jazmin with the whole washing her hair and bathing her. Unfortunately, Reiko tends to drag Jazmin into trouble.

In the present day, Yoro is an instructor at the ninja academy.

During Kyoko’s flashback, Yoro is trapped in the back of a semi-truck during her mission to protect the prime minister.

In the present day, Kyoko Asagi is the high master of the ninja academy. Kyoko first encounters Skye during his trip the girl’s bathing springs, catching him off guard. After Skye puts his clothes back on, Kyoko shows him around campus but assigns Ryu the task after he brings up his father and the adventures they had. Kyoko dismiss Sanaki from chasing her daugther with a lemon drop bribe. Once Sanaki leaves, Kyoko punishes Reiko and Jazmin for their actions on campus, showing no favoritism or special treatment when dealing with and between family and student. Kyoko only has one ear.

In Kyoko's flashback, she snakes into the facility storage room to steal the answers for the next exam with Sanaki. Olga spots them, grabbing Sanaki while Kyoko escapes. Kyoko initially hides from Olga but faces her after she insults her courage, chest size, and buttocks. Kyoko uses Olga's strength tactics against her and bites Olga's tail. With Olga throwing in the air and landing against the wall, Kyoko escapes the fight whenever Jin arrives and summons them both to the high master. During the meeting, Kyoko brushes off Leena's scolding of ending these tricks and pranks since she is the matriarch's granddaughter and future high master. Leena assigns Kyoko, Olga, and Jin to track down Yoro and the prime ministers since she has not received any word back yet. Upon the groups arrival, Kyoko inspects the scene and hears noise coming from witn the truck. She quickly cuts Yoro free from her bondage. Kyoko has both ears.

Ryu is T.J.’s Rival and student at the ninja academy that shows Skye around campus. Based on her statement that she normally carries weights around campus seventeen times a day, Ryu is quite a strong ninja.

T.J. is Ryu’s rival and student at the ninja academy. Priming with suave arrogance and confidence, T.J. uses his speed and strength to counter Skye’s weight attacks and grope Ryu.

In the present day, Sanaki is one of the instructors at the ninja academy. As punishment for Reiko skipping her class and Jazmin being at the wrong place at the wrong time, Sanaki viciously hunts them both down, pulverizing anyone and anything that interferes with her hunt. Sanaki intentionally slurs the s in order to appear more menacing. Sanaki loves lemon drops.

In Kyoko’s flashback, Sanaki is Kyoko’s friend that helps her steal the answers to the next examine. Sadly, Olga captures Sanaki. Olga tosses Sanaki aside when confronting Kyoko.

Yuriko is Nick’s sister and friend to both Reiko and Jazmin. She utilizes a unique variation in logic that fits her version of reality.

Nick is Yuriko’s brother and friend to both Reiko and Jazmin. He often shows concern for his sister’s behavior and faulty logic.

In Kyoko’s flashback, Olga is a dominating ninja who furiously enforces the rules, especially against Kyoko. Olga possesses superior strength among the ninjas.

In Kyoko’s flashback, Jin is the ninja that interrupted Kyoko and Olga’s fight. To ensure success with a mission, Leena assigns Jin to escort Kyoko and Olga in finding Yoro and the prime minister. While he is serious, Jin appears easily distracted when his two women teammates take jabs at the other’s chest size.

In Kyoko’s flashback, Leena is the high master of the ninja academy that scolds Olga for being too brash in retrieving Kyoko and Kyoko for acting too childish. Leena assigns Jin, Olga, and Kyoko to track down Yoro and the prime minister since she has not heard anything back yet.

Change from Usagi to Asagi[edit]

Originally, the last name for Reiko, Jazmin, and Kyoko were Usagi; however, Mastergodai changed it from Usagi to Asagi midway through the comic. The correct spelling is Asagi.