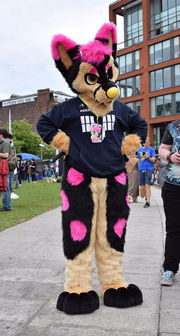 Rainy Chaos (also known as Rainfall Chaos) (born May 2000) is a furry artist, fursuiter and furry vlogger who lives in the country of Luxembourg.

Rain's fursona is a dragon-coyote hybrid with pink spots down her back and pink ear tips and hair. Her body consists of a cream underbelly and black pelt, with two small dragon horns on top of her head.

On January 23, 2017 Rainy Chaos was featured as a "Creator on the Rise" on the trending page of YouTube. Her channel received a spike in traffic and subscribers, but the exposure also resulted in a wave of anti-furry trolling in her comment section, which led her to disable comments and ratings on all of her videos.[1][2][3]