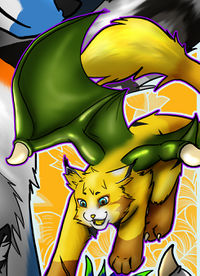 Rai Inuzuma (or "Rai") is the fursona of Steven Harden, a furry who lives in Woonsocket, Rhode Island, U.S.A.

Rai was created on June 24, 2010, and is a dragon/lynx hybrid.[1] His body is covered in mainly-yellow fur, with some black and brown markings. He also has white fur that runs from his chin to his abdomen. Since he is half-dragon, Rai's hind legs have the bone structure of a dragon, giving him have powerful leg muscles. He also has dragon wings. These are wide enough to support him, but any extra weight (for example, more than a full-grown adult) easily get him unbalanced.

Since he is half-dragon, Rai can breath fire. In addition to this, what appears to be a tattoo on his right paw is actually a birthmark that gives him the power to conduct electricity. Hence his name, "Rai", meaning "lightning". He, his twin brother Shyny Inuzuma, and two twin sisters, were all born with the same birthmark which gives them the same power.