Raereira, Rae for short (real name Christine Rae Farrell), is a furry fan and fursuit maker from the USA, but currently living in the UK.

Rae is studying art and design but moving to study illustration in a university in the UK. On her spare time she enjoys playing on the xbox and hanging out with friends.

Raereira is involved in the furry fandom since 2007. After some time as a watcher her activity was mainly in contributing her artwork on Fur Affinity.[1] She is also active as a fursuiter attending different conventions in the US[2] and the UK as well as a fursuit maker. After producing some fursuits for her own she started offering her skills in fursuit making to the community. She is always trying to improve her skills in art and fursuit making. 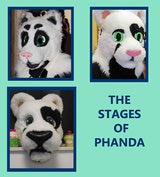 Rae is active as a fursuit maker and produces suits both for her self and as commissions for other members of the fandom. She works mainly in a toony style but is recently moving in to semi-realistic fursuits.

The heads produced are mainly built on balaclavas and foam bases but she is developing her skills in resin-mask based heads aswell. She is also streaming videos when working on fursuits and giving tips and tricks to everyone who asks.

Currently Rae owns two suits of her character Phanda. A third suit of her fursona Raereira is in production and will have its debut during ConFuzzled 2012.