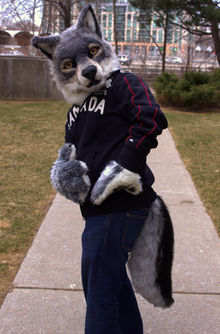 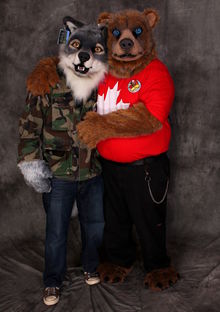 Raed and Maple at Furnal Equinox 2013

Raed Wulf, or just Raed, (also known as TomRaedwulf on Fur Affinity) born September 5 in London, United Kingdom, is a fursuiter and photographer who lives in Milton, Florida, USA.[1]

Originally from the UK, he moved to Toronto, Canada in 2012 at the age of 19. After proposing to his fiancé Maple Bear, the two got married at Niagara Falls, New York,[1] finally moving together to Florida.

After getting settled in Canada, rediscovering the Fandom through his roommate and joining the Toronto furry community, he attended his first furry convention, Furnal Equinox 2013, where he debuted the fursuit of his namesake. Since then, having moved to the US, he has become involved in the local groups along the Gulf Coast and regularly attends Megaplex and Fangcon, since its move to Birmingham, AL

Raed Wulf's fursuit is a partial Gray/Timber Wolf suit built by Guinn'sCustomCreatures. All of GCC's canine heads have been based on Raed Wulf's mold.[citation needed] The suit is a constant work in progress, with the eventual goal of being a full body suit. Raed also has an alternate character by the name of Rusty, yet to be brought to life.