RaKeT, also known as Hogwash, is a fursuiter, dancer, dance competition judge, DJ, YouTuber, and Twitch Streamer who lives in Washington, USA.[1] RaKeT is married to Cosmic the Lynx.[2]

RaKeT's main fursona is a foxcoon. He has a frost-gray body, white belly, black leggings, orange fingers and toes, and an orange mask around his eyes. His hair and eyes are blue. 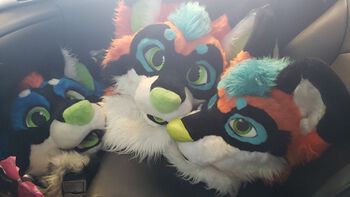 RaKeT's foxcoon fursuit was built by Nick and Lacy, and debuted at Further Confusion 2012.[4] RaKeT communicates via squeaker and occasionally speech. His feet paws contain a pair of Heelys roller shoes, and he can often be seen skating in suit. A second version, known as RaKeT 2.F, was made by More Fur Less in 2015.

Hogwash "Husky" Slanderson was originally made by Mischief Makers, and debuted at RainFurrest 2013. The suit was updated in two parts, with the head made by Splinter Fox Productions and the body by Cosmic the Lynx. He has participated in several dance competitions at conventions. Hogwash is an orange husky with blue features. He has a set of green eyes, a nose, and a tongue. Near his upper back, there are two arrows pointing upwards, which has been stated by RaKeT as a symbol that he is the second-born in the family.

Bolderdash "Blue" Slanderson is Hogwash's much more charming and blue older brother, with the head also created by Splinter Fox Productions and body by Cosmic the Lynx. Bolderdash has much of the same markings as Hogwash, including the trademark green eyes, nose and tongue, but there are several key differences between the suits. Bolderdash is mainly blue with some orange features, which is the opposite of his younger brother Hogwash. Additionally, Bolderdash has only one arrow along his upper back as a symbol of his relationship in the Slanderson family as the eldest son. Not much more is known about Bolderdash except that he is not as good a dancer as his sibling.

BOLDERDASH WAS HERE. BLUE IS BETTER. [5]

Both Hogwash and Bolderdash can be seen together at conventions, usually arguing about if blue or orange is the better color. Both also have their own twitters as well, which will also sometimes argue about the colors with one another.

RaKeT has stated he would like to add a third sibling to the Slanderson family, Poppycock. She will feature the same markings as her siblings, except will be mostly green. Much like her brothers, she will sport 3 arrows along her upper back as a symbol as the youngest in the family.

RaKeT was named as the fursuit coordinator at Califur 10, but was not able to complete his convention duties due to a severe fall he sustained while in fursuit.

Hogwash won first place in the dance competition at RainFurrest 2015 and Furvana 2019.

RaKeT is known for volunteering at Anthro Northwest for the dance competition and floor wars.