RJ (Over the Hedge) 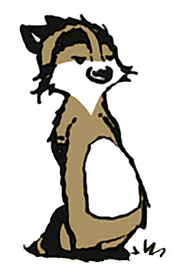 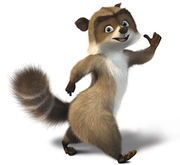 RJ is one of the two main protagonists, along with Verne the turtle, of the Over the Hedge franchise (syndicated strip, animated feature, video game, etc.)

A raccoon con artist, RJ takes pride in being extremely lazy. He apparently envisions himself as an intellectual; however, his "facts" are obviously false. He loves to ransack human homes, as well as watch them and their televisions through the windows.

While he enjoys commenting on human life, most of his statements are false as well, although he has studied humans and knows their ways of getting food, and even has slightly imprinted on them. He was shown to care for Clara (a human baby), even before she was born, (after he learned that babies can hear some things outside of the mother from Verne) by reading The Hunchback of Notre-Dame and singing a horrible version of Stairway to Heaven.

He is sometimes shown without a brain, using his brain cavity to store his "hanky", and breath mints. He is shown to have the ability to expand to fit a massive amount of food, and is known as "that horrible raccoon kid" on Halloween.

It is revealed in one strip that he is an immortal god,[citation needed] and once confessed to Verne for "lighting the fuse" to the Big Bang, which he explained was because "The matches were right there, and the sign said "Don't light this fuse!!!", so...". He also said that the universe will have to reschedule the time when the Sun will burn out, as he has a tail rinse that day. One fateful summer's eve, his father Zeus had a bit of a crazy night and ended up under the bush of RJ's mother.