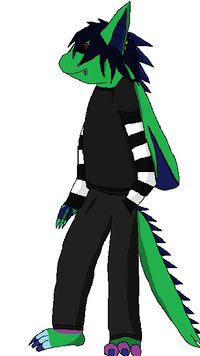 RIMokINA in her anthropomorphic form

RIMokINA in her non-anthropomorphic form

RIMokINA in her anthropomorphic form, without a shirt

RIMokINA, also known as rimokina, Rimokina, Rimo, and R.K., is a furry artist and writer who resides in Washington, U.S.A.

RIMokINA's fursona is a genderless (although is still referred to as she and her) lizarbat, a fruit bat who has been experimented upon. She has been fused with so many different species, mainly human, reptiles (iguana, water dragon, and Komodo dragon),Megabat, Utunagan and Chilean rose hair tarantula, that she is often mistaken for a dragon.

RIMokINA can not move her wings herself, but has to manually flap and extend them with her hands. This is due to her arms detaching from her wings upon her first genetic fusion.

Due to the various tests done on her, she has developed various mental illnesses, such as anxiety, paranoia, and auditory hallucinations. Sometimes she talks to herself, and claims to be talking to the spiders.

Because she is a reptile and does not have breasts, she often goes shirtless, she has three blue spikes on her chest, and has more spikes on her back. She also always wears long sleeves, and when she is shirtless she wears black and white arm warmers, no matter what she always has to have her arms covered, she says it is because their is something horrifying on her arms, and she doesn't want anyone (even herself) to see it. 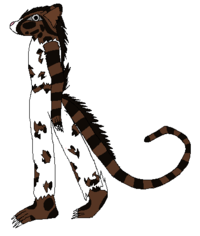 She currently has two characters, her Fursona, and a caffeine addicted male genet named Fenrixx.