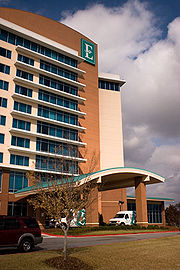 Rocket City FurMeet, known as RCFM, was an annual furry convention in Huntsville, Alabama, USA that met over Memorial Day weekend. It was started in 2003 by Brody Catsmouth, KO, and members of North Alabama Regional Furs. From the beginning, the meet was held at the Radisson Suite Hotel on South Memorial Parkway in Huntsville, Alabama. In 2009, the meet was held in the Embassy Suites Hotel and Spa on Monroe Street near the downtown core of Huntsville.[1] RCFM has numerous food events and is well known for striving to keep guests well-fed. RCFM is funded through the 501(c)7 corporation "Rocket City FurMeet, Incorporated.

The convention's last event was held in 2012, and has subsequently been shut down.[2]