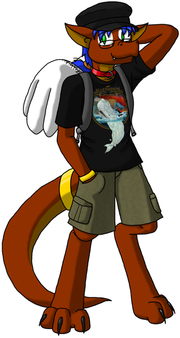 QuetzaDrake, also known as Twiggy, is a furry artist and writer located in Michigan. He is best known for being the author and artist of webcomics Furthia High and the now-ended DATAROM!.

QuetzaDrake has been in the furry fandom since sometime in 2004. His dragon fursona has remained fairly consistent over the years, only going through a minor change of clothes and one major body alteration since its conception. He has taken jabs at changing his fursona to a rabbit, and switches between his dragon, rabbit, and ringtailed lemur species often. He is mostly depicted as a dragon, though. He has also been known to have taken on Martian and Zerg forms.

Despite making a name for himself in the fandom as an artist and writer, he actually majors in psychology. He has also been ordained as a minister of the Universal Life Church.