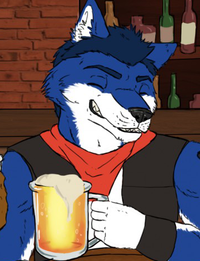 Psycho Talbain is a Brazilian furry and computer-game designer. He was born on November 27, 1989, in Curitiba, Paraná, Brazil, where he still lives.[1]

Psycho started in the furry fandom through the site Furry Brasil in 2003. His first public appearance was at Abando 2013.

Psycho's fursona is a white and blue wolf. His hair is messy, and a darker blue. He wears a black open vest, red scarf, black pants, and black wristbands.

Psycho Talbain has been producing computer games since 2006, using the RPG Maker 2000 software package. One of these games. A trilha do lobo (The Trail Wolf), is a roleplaying game which portrays furries and humans throughout history. The game was designed to have five chapters, but was left open-ended after the first chapter.

One of Psycho's friends, Gaubú, transformed A trilha do lobo into a comic drawn in a manga style. The story has five volumes. Each volume has three chapters and each chapter has an average of 20-25 pages.

Psycho has appeared at: