Project Zero is an action/adventure/comedy/fan service webcomic drawn and written by Mastergodai and soft brushed by Upstairstudios, which first began in 2011.[1] The latest comic page was posted in 2015.[2] It is hosted on Petite Symphony and The Katbox. 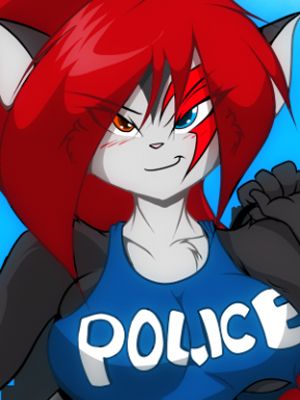 While enjoying a Chicago Special, Sergeant Eliza receives orders over her intercom to head to East 42nd, Bank Alive National Bank to negotiate with armed criminals breaking into the safe with hostages. Eliza arrives to the scene just as the criminals have successfully entered the fault and is immediately greeted with a barrage of bullets. Searching through her vehicle compartment, she pulls out a rocket launcher and fires it at the criminals.

Following the events that unfolded in the prologue, Eliza’s captain reprimanded her for firing an M72-LAW into the middle of the bank robbery during active negotiations with hostages involved without direct orders and for her nonchalant demeanor. For her punishment, Eliza has been sent back to Fort Lockruft to train the rookies. While reminiscing of her time at Fort Lockruft and looking over her roster while walking into Fort Lockruft, Brass, her rival, greets her with a practical false arrest joke. After dealing with Brass’s humor, Eliza retires to a room to look over her roster. Eliza first examines A.J. Leigh’s sheet and notices that her code name is Loose Cannon in addition to being the head of the class in firearms. Eliza remembers that she was called the Lone Wolf back in her days. While Eliza continues to go over the rest of the roster, A.J. Leigh is enjoying several beers at a party. Returning back to Eliza and her roster, Captain Takari, an old acquaintance, drops in on her for a little chat. Captain Takari offers Eliza a special assignment to go undercover as an escort to find direct evidence to a drug and arms dealer case she’s been working on as she needs someone that has never been seen in her precinct. Eliza accepts the offer and goes with her to prepare.

Disguising herself as an escort with a blue colored contact lens in her right eye and makeup to hide her signature red scar, Eliza infiltrates Xavier’s party. While dealing with her thong and Julia’s complaints of being left outside, Howard interrupts Eliza’s chances of getting closed to Xavier, the suspected drug and arms dealer. Howard initially introduces himself to Eliza as Xavier and informs her that he must frisk her for any hidden bugs or weapons. Hearing this and knowing that he is now Xavier, Eliza tells Howard to get lost; however, she quickly changes her aggression and demeanor whenever he hints at the fact that he knows that she is a cop. Inviting him to a dance, Eliza grabs hold of Howard’s sensitive parts and demands to know who he is. Howard reveals that his real name is Key Hayter and is a private detective who has been undercover on this case for some time. Key tells Eliza to back off of this case and to take her associate with her. Confused, Eliza looks over to see A.J. egging the D.J. and angrily pulls her into the restrooms. Once inside, Eliza demands to know what A.J. is doing here as she was under the impression that this was a solo mission. A.J. informs Eliza that she begged Captain Takari to join in on this case. Suspicious, Eliza does compliment A.J. on her firearms skills but asks her to leave as she is too inexperienced to handle this case. In response to this, A.J. brags to Eliza that she has already danced with Xavier, calling him an old pervert for liking his women young and insulting Eliza in that he would shoot her down if she made a move on him. Frustrated, Eliza contacts Julia to see if she has any information on Key Hayter as she is surprised that Captain Takari failed to mention this prior to the event. After a brief cool down, Eliza allows A.J. to stay and lets Julia know that she is about to call it quits if nothing happens soon. At that precise moment, Eliza hears a loud boom and quickly reaches for her concealed handgun. Sensing something off with the lack of noise, Eliza slowly creeps back into the party room and witnesses a female assailant in a biotech suit, a special type of armor issued only to police and armed forces, burning the place up. Eliza tries her best to take down the biotech suit assailant but fails miserably due to heighten physical abilities. After severe beaten, Eliza wakes up to the sight of Julia carrying her across the room and to A.J. telling her that the biotech suit assailant left after killing Xavier and warning her that she would not be so lenient next time they meet.

The next day, Eliza mentally kicks herself for wrecking the whole case and having her rear handed to her in combat. Before heading to report to the Captain, A.J. waves Eliza offer and finally comes clean that she actually overhead Eliza and Captain Takari talking about the mission and decided to tag along in order to make a good first impression. At the meeting, Captain Takari places A.J. on probation rather than taking her badge. Hearing Eliza’s praise for A.J. in rescuing her from the biotech suit assailant, Captain Takari instructs A.J. to shadow Eliza for additional training and takes the both of them to the research and development division. Captain Takari informs them that she has been working on a special espionage team and has officially recruited them into said project, dubbed Project Zero. Project Zero is a special police task force that will be assigned missions that the police couldn’t normally handle through legal channels, essentially a legalized vigilante team. Captain Takari will issue the missions directly. While she explains all this, wristbands have already been attached to all the women without their knowledge and are synchronizing with their bodies. While touring the research and development division, Eliza encounters Brass, enduing another round of innuendo humor. In the locker room, Eliza reveals to A.J. that Brass started this rivalry with her years ago on who could be the number one cop. Brass enters the locker room to brag about her larger chest size and becoming the leader of their division. Brass suffers an ego bruise whenever Captain Takari announces that Eliza will be the lead of their team over the intercom.

Meanwhile, Revy, a hired gun, orders her criminal associates to stop the car before they hit Nekonny. Revy adopts Nekonny and places him in her cleavage for protection. Before their heist, Revy informs Phil, the driver, that she wants out of the game. The criminal crew trips an alarm during the heist and scatter to the top of the roof. Phil says that a chopper is coming for them and shoots his unnamed fellow criminal in the back, killing him instantly. Phil then orders Revy to lower her gun.

Sergeant Eliza is the primary protagonist of Project Zero that appears aggressively overzealous and ambitious when employing the law and appears nonchalant about the damage it causes. In fact, the combination of these character traits resulted in Eliza’s reassignment to Fork Lockruft to train rookie recruits after using excessive police force during a bank robbery. During her time there, she is reacquainted with Brass, her rival back in the day, and Captain Takari, an old friend that asks her to infiltrate Xavier’s party. After several shocks and fights at the party, Eliza is assigned to Project Zero, legalized vigilante squad.

Brass is Eliza’s primary rival. This rivalry started on who would be the top cop back whenever they first joined the force. Ever since then, Brass has been pulling multiple pranks and employing countless innuendos towards Eliza. Despite her confidence, Brass is shocked to hear that she is second in command of her squad.

A.J. Leigh is a new rookie under Eliza’s rooster. A.J. is assigned the code name Loose Cannon and has the badge number 4690. Despite having stellar firearms experience that rival that of Eliza, A.J. is rather aggressive and too much of a partier. In fact, A.J. intentionally broke protocol and went to Xavier’s party after overhearing Captain Takari and Eliza’s conversation. A.J.’s actions during the party, specifically meeting with Xavier and rescuing Eliza, earned her only probation and a spot in Project Zero.

Captain Takari is a captain at Fort Lockruft that knows Eliza from back in the day. After catching up with her, Captain Takari asks if Eliza would go undercover for a major bust, which she accepts. The next day, Captain Takari reprimands A.J. for heading to the party without permission; however, she is impressed with her motivation and assigns her to follow Eliza. Captain Takari takes A.J. and Eliza to the research and development department and enlists them in Project Zero, a legalized vigilante squad.

Key Hayter is a private detective that has infiltrated Xavier’s organization. Xavier knows Key as Howard. Key initially introduces himself as Xavier to Eliza and tries to frisk her. After having his advances denied, Key hints that he knows Eliza is a cop. During their dance and Eliza’s "tactics", Key divulges his true identity and tells her to take A.J. and get out of here.

Xavier is currently under investigation for his drug and arms dealing. From A.J.’s brief introduction with him, Xavier does seem to prefer younger women. The Biotech Suit Assailant killed Xavier.

Julia is a police officer that served as Eliza’s backup and van lookout during their infiltration of Xavier’s party. Julia does get some field time when she had to back up Eliza and A.J. from the Biotech Suit Assailant.

Revy is a silent hired gun that is hired to rob a target with Phil and another unnamed assailant. During their drive to the target, Revy orders the vehicle to stop and rescues Nekonny. Revy’s kindness towards Nekonny is immediately transformed to rage and frustration when Phil interrupts her. Before the heist, Revy tells Phil that this is her last job and tells him to lose her number.