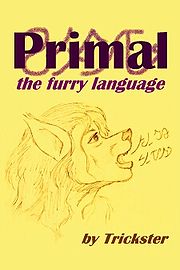 Primal is a constructed language created by were and furry artist, Trickster, and intended to be spoken as a common tongue in the furry, therian, and otherkin communities. The language has lost significant traction among the above communities since 2012.

Primal is richly detailed for a conlang, with around 3000 words (mostly nouns), more than some language constructs, such as Klingon or Quenya. Primal is an analytic (syntax-based) language in subject-verb-object order with no grammatical gender.

In this sense, its grammar is very similar to Chinese. Primal's grammatical structure and its use of general-purpose affixes as modifiers and linguistic markers allows very complicated concepts to be expressed succinctly and unambiguously.

Primal is nearly invariantly phonetic, with contextually predictable substitutions occurring for only one letter of its alphabet. The alphabet consists of 24 vowels, 23 consonants, and one punctuation mark. Primal is spoken slowly, and all of its letters are English familiar, so the spoken language sounds similar to English.

Primal has its own script and font. The script is useful for representing Primal's large number of phonemes.

The following text in Primal says, "I can speak Primal fairly well." It is pronounced "wee lur-ma-mee wih k'lulf".

A TrueType font (PC/Mac) can be downloaded and installed to allow users to write, or display text written, in Primal.