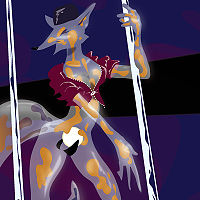 Example of a Postfurry character -- a lavalamp vixen, created by Postvixen and illustrated by Egypt Urnash.

Postfurry is a micro-movement within the furry subculture[1] that uses the intellectual toolkit of postmodernism to challenge, expand, and play with the definition of furry. It is strongly influenced by ideas from the biopunk, cyberpunk or postcyberpunk approach, magical realism, postgenderism and post-structuralism[2] movements, as well as "other things that draw those with an interest in a biopunk, cyberpunk or postcyberpunk aesthetics to postfurry beyond just the transhumanist leanings, and ditto with magical realism and postmodernism."[3] Postfurry incorporates "the queering of furry, transliminality, absurdism, empathy, and conscious identity management"[4] into a tendency within furry, rather than into a doctrinaire movement.

Postfurry coalesced in the early 2000s around Postvixen, Egypt Urnash, and Postrodent. It primarily expanded through their social circle via LiveJournal, Fur Affinity, and MUCKs. By 2010 it had settled into being a loose group of creators, tropes, and themes all producing work that could be identified as postfurry, without identifying itself as such. The postfurry tendency formed an accretion disc around several furry households in the Pacific Northwest.

The tropes in question tend to blend animal, human, and mechanical forms: science-fiction tropes of mechanical personhood are often used, as well as visual puns (for example, a "phonogriff" character with strategically placed woofers and tweeters). Sexual content in postfurry is strongly influenced by latex fetishism, hypnosis, transformation, robot fetishism, and xenophilia. Postfurry content in general is preoccupied with questions of personhood, gender, the future, and the mind, and it tends to approach these questions in optimistic, sex-positive, and self-consciously experimental ways.

Postfurry is commonly associated with biopunk/cyberpunk/postcyberpunk and transhumanist science fiction, but it is also influenced by psychedelia, rave aesthetics, anarchist philosophy, retro-futurism, and post-structuralism.

Postfurry role-play and fiction often takes a postmodernist view on culture and reality, especially in testing the boundaries of what constitutes a "real furry." Postfurry characters are usually linked to their supposed species only in a symbolic way that may have nothing at all to do with real-world zoology.

Not all of these artists self-identify as postfurry: rather, these are artists that postfurries themselves draw inspiration from or whose work often displays postfurry themes.