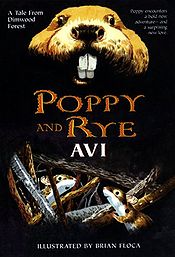 Poppy and Rye is a novel, by Avi, also the author of a famous book, Charlotte Doyle. Poppy and Rye is a part of the Tales from Dimwood Forest series, by Avi, best-selling author. Illustrated by Brian Floca, it was first published in 1998. A Harper Trophy edition was published in 2001 as a paperback with the ISBN 0380797178.[1] Background Avi conceived the idea for Poppy while living in Corvallis, Oregon, when his wife was a visiting professor at Oregon State University. At a university bookstore, he found a book written by a naturalist, who described his experience rescuing a baby owlet and nurturing it back to health and into the wild. Avi found the book "fascinating" and decided to write his own novel about an owl named Mr. Ocax. While developing the story, however, Avi's interest shifted towards the mouse that Mr. Ocax planned to eat, and the mouse eventually became the primary focus of the book. Both the book and the mouse were originally named Pip, but after discovering that another children's book existed about a mouse named Pip, he decided to rename the book and the character to Poppy.[3] Readers begged for the sequel, so soon Avi wrote and published another book called Poppy and Rye that showed the adventure of them together, and how Poppy was married to Rye.

The main character is a deer mouse, Poppy, who travels with her porcupine friend Ereth and meets Rye, the fellow brother of poor Ragweed, who died in the book, Poppy. Ragweed was the daring and foolish fiancé of Poppy, but before they got married, he dies after an owl killed him. Poppy and Ereth journeys out to tell Ragweed's family that he is dead, but their home is flooded with beavers, making it hard to pass the message. The book is the sequel to Poppy. BUY NOW FOR A CHEAP PRICE