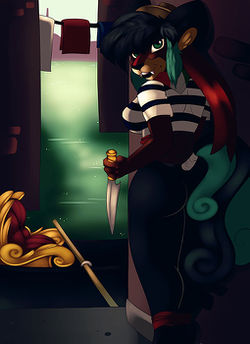 PopessLodovica, also known as Kayla the Dragoness and Phauna (real name Rika; born April 6),[1] is an Italian artist living in Italy.[2] Their nickname comes from one of their favourite comics, called Sky Doll.

PopessLodovica has been drawing since the age of three, inspired by Looney Tunes cartoons and videogames such as Crash Bandicoot and Spyro the Dragon. They later got into cyberpunk and sci-fi as main inspirations for their works.

PopessLodovica's fursona, Rika Brighella, is a Venetian ram/horse hybrid with some deer attributes. Her backstory is a metaphor of the artist's life, along with real facts. The female version of the fursona was mainly created as coping mechanism for the artist, but they ultimately decided to change their sex/gender for compfort reasons, as they don't identify with their physical sex.

Rika is a morally ambiguous character, as their nickname Brighella implies - but actually more kind-hearted than the homonymous Commedia mask.

The artist's "rebooted" fursona. From their bio:

Rika "JC" Brighella is a nanotechnologically augmented agent. They are an artificially engineered being (especially considering they are a hybrid of three species: ram, deer and horse) in which have been implanted artificial memories about their own origins. While created biologically female, Rika is addressed in a gender neutral way, or masculine.

When in mission, they prefer to use a non-lethal approach (pacifist much) but they have no problem using lethal force in crucial situations if needed. On their back, there are three circular "holes", that are actually sockets to connect themself with most machines. The solid blue eyes shine costantly, becoming brighter as they use further augmentations related to them - same goes for their under skin nanites: they are not visible under their short fur unless in action. 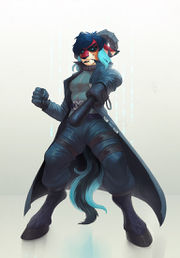 A more female-presenting Mr. Ending by Damiem on FA.

Rika is a stoic, introverted type. While they enjoy the company of others (as long as they aren't loud or obnoxious) they don't talk much, unless the subject of discussion interests them. Due to certain things happened to them in the past, most of the time they don't feel compfortable presenting as female, therefore binding their chest and using their incorporated voice-modulator to render their voice very masculine. Said things happened in the past also led them to take it personally if some higher-in-rank figure abuses of their power.

They present as male - ence the nickname "Mr. Ending", which they prefer to their birth name.