German Shepherds, a type of dog

The term dog may refer to a number of organisms, but is used here to describe the domesticated canine. Canines are the most popular phenotypes of furries, with a significant number of these being domestic dogs.

The domestic dog (Canis lupus familiaris) is a subspecies of the gray wolf (or grey wolf) (Canis lupus) and a member of the family Canidae.[1] Dogs are carnivorous mammals, though generalization about the subspecies is problematic because of the extreme variation brought about by the result of their domestication. Most dogs will eat almost any type of food. A few things may be said to be generally true:

Dogs can perceive sounds across a wider range than that of humans, from 20 Hz to 100 KHz (as opposed to 20 Hz to 20 KHz) and, thanks to mobility in their ears, can localize sound with greater precision. In addition, their sense of smell is significantly more advanced: it is said that a bloodhound can detect a single drop of blood diluted with five gallons of water.

Their sight allows them keen perception of motion, and their field of vision is larger than that of humans (while still following the binocular vision typical of the carnivore pattern); however, they are dichromats and therefore functionally colorblind. Their visual acuity is relatively low, with much sensory input being olfactory and auditory. Dogs have great night vision.[2]

They are generally less robust than their wild ancestors, with a less pronounced muzzle and an overall reduced muscular structure. Some of this may have to do with their upbringing; tellingly, wolf puppies raised apart from their society from birth develop some similar traits. However, with hundreds of breeds ranging from the Yorkshire terrier to the mastiff, and the basset hound to the saluki, such generalizations have only limited value in describing the subspecies as a whole. 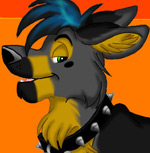 Wolves domesticated at some point greater than fifteen thousand years ago (possibly as long ago as one hundred thousand years or more) form the basis for all modern canine stock; the dog is in fact identified taxonomically as a subspecies of Canis lupus. The relationship since then has been cozy; ritual burials suggest a close association between the two species as early as the Mesolithic.

In modern context dogs have many roles within human society. Many are "employed" in search and rescue and drug/contraband location; others act as seeing-eye or assistance dogs. Throughout history they have served as everything from pack animals to emergency food source, although today both of these uses are much less common. A significant number--perhaps the vast majority--of dogs in the western world are companion animals with no assigned task per se.