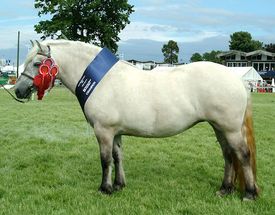 A pony is by definition any of several different horse breeds with a specific conformation and temperament. They tend to only measure less or equal to 14.2 hands high (hh) at the withers, where one hand is equal to approximately four inches. However, the term "pony" can be used in general (or affectionately) for any small horse, regardless of its actual size or breed.

Ponies are quite common for furries that are horse lovers, instead of actual horses. They are generally grouped into the horse crowd. Ponies are typically played by babyfurs and little furs because of their small size and juvenile appearance. Pony characters are also popular among the ponyplay crowd in the fandom. Other popular ponies are the My Little Pony crowd. Dedicated to the popular toy line, fans of My Little Pony collect, draw, even make custom My Little Ponies. Examples of artists and MLP fans include Frisket, HavocFox, Mayra Boyle, Tserisa, Whippetluv, and Doug Winger.

"Ponies" (people involved in ponyplay) generally divide themselves into three groups, although some will participate in two or perhaps all three: