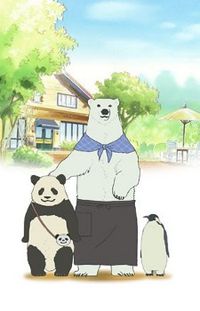 Polar Bear's Café (Shirokuma Cafe) is a Japanese manga series by Aloha Higa. It revolves around the everyday lives of a group of animals mingling with humans at a café run by a polar bear. An anime adaptation by Studio Pierrot began airing in Japan on April 5, 2012. There is a english fansub by "Horriblesubs".

Polar Bear's Café revolves around a Canadian Polar Bear that quits his boring job and starts a cafeteria near a zoo. He loves telling tall tales and always brags about himself. According to him, he was picked up by a human couple who owns a diner while he was drifting around on an iceberg.

Though he has lost all contact with his Canadian family, he has discovered a new home in serving the diners' clientele, thanks to the kind couple. His café is an embodiment of his personality. The place is always packed with many regulars, animals and humans, who are drawn by his charismatic magnetism.