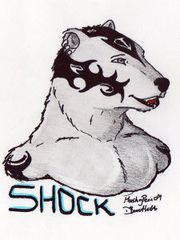 PolarShocK (or just ShocK; born September 27, 1984)[1] is a furry writer and fursuiter who lives in Hereford, England.[1]

ShocK's fursona is an anthropomorphic polar bear from another dimension.[2] He sometimes acts quite strangely around people, as he is still getting to grips with this reality and its inhabitants. Despite this, he is a friendly ursine with a good heart, if somewhat prone to making a tit out of himself every now and again.

ShocK is hyperactive, curious and easily distracted. He has a deep fondness for fire, seal burgers and whiskey. He is of reasonably muscular build, has three rings in his left ear, and a ring through the centre of his bottom lip. His preferred attire is just a pair of black baggy trousers, with no shoes. He prefers to walk on barepaws.

ShocK's main distinctive markings are his tribal tattoos, which begin on the top of his head and the sides of his muzzle, going down the back of his neck to a design on his upper back, which connects the tribals that run down both of his arms. These have been known to shift shape and design, but not position. Why this phenomenon occurs is not known.

ShocK's fursuit, depicting his fursona, was constructed by Blizzard.[3]

In March 2010, he was voted in as vice-chairman of the BristolFurs.