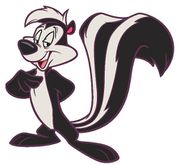 Pepé Le Pew is an anthropomorphic skunk and considered by some to be a furry sex icon. Created in 1945 by Chuck Jones, Pepé is an overamorous fellow who is always looking for love, despite his odor and his aggressive habits. He is particularly interested in Penelope Pussycat, a cat who accidentally gets painted like a skunkette. Pepé's foul odor and intrusive, aggressive seduction attempts are both traits that many Americans associate to a degree with stereotypical French men. Pepé won an Academy Award for For Scent-imental Reasons (1949). Most skunk furries identify or represent themselves with Pepé and the skunk can be found in many yiff art, gaining sex idol status in the fandom, partly due to efforts by such as Cigarskunk and Eva Triple.