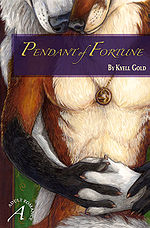 Pendant of Fortune is an anthropomorphic fantasy novel by Kyell Gold, published by Sofawolf Press in January 2006, with illustrations by Sara Palmer. It is set in the same world as Kyell Gold's previous novel Volle, and is a direct continuation of the events that occur there as well as in the short novella The Prisoner's Release.

Five years after the events of Volle, Volle steals a set of plans for Tephos to take back the Reysfields from Ferrenis, but is captured and imprisoned by Dereath Talison. He manages to escape with his guardsman, Streak, back to Ferrenis in order to turn the stolen plans over to them. He’s given a piece of farm land for his service, where he lives with Streak.

A year later, Lord Tishtunish writes to Volle, asking him to return to Tephos to defend his title as Lord Vinton. Streak, despite being in danger if he were involved, convinces Volle to let him join the trip.

The two travel to Vellenland for the hearing. Upon arriving at a pub, Volle notices a hare staring at them. They arrive at an old mansion, where Volle reunites with his old friend Helfer. Helfer informs Volle that Dereath has taken Lord Fardew’s position in the palace and will be present at his hearing. Streak and Volle engage in oral sex, but Volle can't stop thinking about Tish, who deceived him in his letter.

The next morning, Volle travels to the castle where he meets then confronts Tish. Tish apologizes then reveals his plan to help Volle win his hearing: to have him show a pendant that he's been wearing. Volle meets Helfer's partner, Laya, who has given him an offspring, reminding Volle of Ilyana and the cub they have together, Volyan.

Streak is taken into custody. Dereath tells the head investigators, Archie and Captain Nero, that the victim was his witness to Volle's case, and that Streak was found at the scene of the crime. Volle and Helfer are taken back to the castle for the night, where Volle expresses some doubt about whether or not Streak was guilty.

The next day, Helfer brings Volle to a church service. He runs into Ilyana and Lord Dewanne, and sees his son Volyan, who's now able to talk. Volle enjoys the service that talks about making sacrifices. After the service, Nero asks Volle to look over the crime scene. He finds Streak's scent on the murder weapon, but doesn't recognize it. Volle asks to see Streak, but Dereath will only allow it in exchange for sex. After Nero finishes talking to Volle, Volle discovers the towers that hold Streak captive, but while trying to find a way to see him, he's caught by a guard and escorted out.

Tish reassures Volle that even with Dereath's witness dead, he has a good chance at winning the case, but Tish warns him that his feelings for Streak may be a distraction. During a rainstorm, Volle climbs the prison tower in hopes of seeing Streak, but they're only able to hold paws momentarily. The next day, on a run with Helfer, the weasel tries to tell Volle that giving into Dereath won't be too terrible. Lord Dewanne offers to take Volle to a local steam spa. Volle reluctantly goes with him, where they're joined by Ilyana, Volyan, and Lady Dewanne. Volle bonds with Volyan, and Ilyana asks Volle to take Volyan with him back to the palace in Divalia. Dewanne asks Volle to bear a second child so he can name them his heir.

After much consideration, Volle tells Helfer that he'll give in to Dereath's demands in order to see Streak. Helfer sends an older otter, Ellitt, to Volle's room to alleviate his pent up sex drive. Afterwards, Volle feels guilty. The next morning, Volle argues with Helfer about his actions. He tells Archie about his plans to see Dereath, and also warns Reese about his whereabouts in case anything happens.

Volle goes to Dereath's chambers. Dereath has a rabbit servant nearby to watch. As they proceed to have sex, Dereath taunts Volle about knowing his identity, wounds his crotch, and pulls on his tail. Dereath takes Volle to see Streak as promised.

The two lovers reunite. Streak tells Volle that he didn’t commit the murder and explains his absence from earlier: Dereath promised him that he’d let Volle off the hook if he agreed to have sex with him. Streak explains that Dereath pulled on his tail as well. Volle realizes that Dereath was using scent transfer to get Streak’s scent on the murder weapon and that Dereath set Streak up to look like the killer. Volle realizes too late that Dereath was planning to use the same set-up on him. The guard outside is killed with the weapon having Volle’s scent on it. Volle is arrested, but not before he tells Archie to get his full scent. Nero later visits Volle, and while he believes Volle side of the story, doesn’t fully believe that Dereath himself committed the murders. Volle is brought before King Barris to discuss the murder charges. Archie reveals that he secretly watched Dereath and Volle’s liaison, and that while Volle’s scent was on the murder weapon, a cinnamon odor on Volle’s paw from earlier wasn’t present, but did come from Dereath’s possession. Archie also testifies that he witnessed Dereath murdering the guard. Dereath is sentenced to death. One of the guards, Forrin Macleith, offers to be Volle’s personal guard. Dereath’s rabbit assistant, Terril, asks to be one of Helfer’s assistants now that his lord is condemned. Streak expresses that he doesn’t want to go to the palace in Divalia, and that he’d rather return to his and Volle’s farm. Volle brings Streak to an impromptu party Helfer throws for them. When they return to their chambers in Helfer’s palace, Volle and Streak have sex before the latter notices the scent of otter on their pillow.

Volle tells Streak about his earlier encounter with Ellitt. Streak forgives him, expecting similar behavior should they return to the palace. They head to the steam spa with Tish, Tika, and Volyan. They’re joined later by Dewanne and Delia, but Volle notices Dewanne acting odd. Volyan tells Volle that Ilyana wishes to see him later. Volle visits Ilyana and sees her bedridden and sick. Ilyana reveals that Dewanne went behind Volle’s back and mated with her in order to have his heir. But because she feels more loyal to Volle, she gives herself an abortion, wanting a proper cub with Volle. Volle promises to return the next day to mate with her.

The next morning, Volle and Streak attend a Church service with a sermon on starting a family. They head over to Ilyana’s boarding house where Streak has sex with Volle to help him properly mate with Ilyana. When the three finish, Ilyana’s boarder kicks her out of the house because of their act. Volle invites Ilyana to stay with him at Helfer’s mansion.

The next day was the day of Volle’s hearing. Tish asked Volle for his pendant to help in his defense. Tish then told King Barris the story of how he got the pendant from one of the fox’s in Vinton’s line: when the son of a previous fox king was killed, his brother took the pendant off him to give to his son — supposedly, Volle. Streak — whose real name is revealed to be Bayard Lilian — is then called to testify regarding the stolen plans. Streak tells everyone that he wasn’t aware of any plans and that he was the one who broke Volle out of prison. Afterwards, Terril takes Streak to retrieve some transcripts that Dereath previously had of their conversations. Barris talks to Volle in private, where he reveals that the original war plans were fake; a trap set to catch Volle in the act after Dereath’s constant complaints. Although Barris isn’t sure if Volle is a spy, because of a lack of proof, how well Volle assimilated into the role of Lord Vinton, and the newfound “revelation” of his royal blood, Barris allows Volle back into the palace.

While the group celebrates Volle’s win, Archie secretly tells Volle that he lied about watching Dereath kill the guard. Volle realizes that there was only one other person who could’ve committed the murders: Dereath’s assistant, Terril. Volle and Forrin race to Terril’s quarters, where they see Streak tied up. Terril reveals himself as the killer. He orders Volle and Forrin to stand down with the intent to kill the former and escape, allowing Dereath to be free of the death sentence. Just as Volle lies down and accepts his fate, a tied-up Forrin knocks down Terril and bites out his neck, killing him. Streak takes Forrin to the Church to get cleaned up. Volle worries that Streak will leave him after nearly dying. With Terril now exposed as the murderer, Volle realizes that Dereath may soon be released. Volle visits Dereath in his prison cell, where he continues to gloat, but Volle ensures that he doesn’t escape by convincing the guard to kill Dereath himself as an act of heroism, and leaving his keys behind so he won’t be a suspect.

Forrin tries to resign from Volle’s personal guard, but Volle convinces him to stay. Streak decides that he doesn’t want to be in the way of Volle’s life, but Volle tells him that he’s part of his pack, which Streak gladly accepts.

Weeks later, Volle, Streak, and Volyan have returned to the palace in Divalia. Tish visits Volle, and reveals that the pendants shown at his trial weren’t found on a royal fox’s body, but the pendant was originally Volle’s and that Tish had a duplicate made years prior. Volle figures out that Tish planned for Volle to get the war plans so that he would have an excuse to push for a peace embassy between Tephos and Ferrenis, having had enough with the threats of war. Volle resigns as a spy, much to the chagrin of his boss, Captain Avery. Volle, Streak, and Volyan head back to the castle as a new pack.