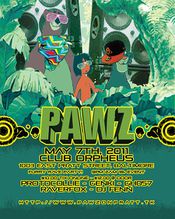 The flyer from Pawz's May 7th event.

Pawz on Pratt is a furry rave organized by the the Baltimore City Ravers and DJ Raverfox held in Baltimore, Maryland, U.S.A.. It is held on the first Saturday of every month. Pawz on Pratt's first event was held in January of 2011[1], and it has run every month since. It is held at Club Orpheus, located in downtown Baltimore. However, there are plans within the group to hold events at different locations as well.

Pawz on Pratt was discontinued, by name, since June 2011. However, the name "Anthro-Rave" has taken it's place, set to launch starting November, 2011.

Pawz styles itself as an event run for and by the furry fandom. It's headliners are all members of the fandom, and include:

Music is played from the underground rave genres such as hardstyle/hardcore, dubstep, electro, drum and bass, glitch/fidget, and drumstep.

Pawz's total attendance fluctuates from 65 to 120 attendees. At the event's main website, attendees can get event information, buy tickets, and view the latest flyers. Members of the Baltimore City Ravers enlist the help of local furry group moderators and admins to spread awareness of the event locally, and it is promoted via Fur Affinity journals, on The Furst State's message board, and in other locations online.

Tickets to attend Pawz cost $10 for pre-registration online, $12 at the door.