Pawsru.org, formerly Paws.ru, was an image board based on the 2ch style art community, where users can request and post furry related images. Hosted in Russia, Pawsru.org was an English-speaking board.

Created on September 13, 2007 as Paws.ru, the site was updated to Kusaba 1.1.0[clarify] on December 19, 2008. In February of 2010, Paws.ru changed its domain name to Pawsru.org.[1][2] Once an active community, posting slowed starting around 2013. Spam plagued the site consistently in the last couple of years, with it becoming especially frequent in the month leading up to the site's closure. Mods combated and removed the spam as best as they could, but did not have access to the site's servers.[3] The site admin, Bartimaeus, seemingly became disinterested with the website, leaving mods frustrated with little course of action.[4] A dwindling user base, coupled with growing spam and helpless mods, eventually lead to Pawsru.org going offline on October 30th, 2015.[5] It is largely considered shut down.

The site's older (Old Paws Archive) boards, which were linked through stickies at the top of their newer (PawsX) boards equivalents, were not affected by the later spam because they were locked. These older boards had years worth of content stashed on them that was, for all intents and purposes, largely forgotten about as time went on and users diminished. Unfortunately when the site went down, it took all of this content with it. The Wayback Machine only provides partial captures for both newer and older boards; full size images, for the most part, were not saved.

There is a theory that the site was being spammed manually, by people who tried to sabotage threads where users uploaded paysite content, as the site eventually had captcha and security measures that would prevent bots from doing the spamming.[6] Previous issues, relating to spam and other factors, resulted in large wipes of content from boards, such as in 2008[7], 2012 and 2013.[8][9]

On January 8th, 2018 a very kind person converted backups posted on the refugee board to a newer chan software and began hosting feetpaws[13]. Unfortunately, while the backups were originally set up as weekly they broke in December of 2013 and were never fixed. It's also only a backup of the newer pawsX section, the older locked board was not backed up and is lost. 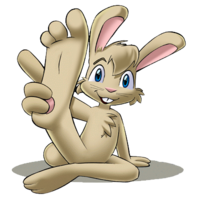 Pawsru.org introduced a new mascot named Pawl for the site in 2009. Character created by by Krezz Karavan.

Otf is moderator only in /aws/ and does not read other boards.