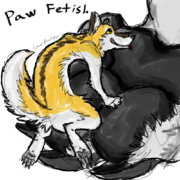 A paw fetish (or footpaw fetish) is a strong affinity for the feet/paws of furry characters. Often (but not exclusively) sexual, this adoration of paws is the furry equivalent (or an extension) of a human foot fetish.

Paw fetishism varies greatly, due to the many different ways paws can be drawn. For example, some people prefer human-like paws, some padded animal-like, and some cartoony. Some fetishists' attractions are exclusive to a single style of paw, while others' don't really mind any which way. Furthermore, art style and toe number can be similar factors.

Paw fetishism has all the variability of a human foot fetish: some fetishists only like clean paws, some dirty paws, some with socks, some mixed with shoe fetishism, etc. Macrophiles, similar to giant/giantess fetishists, are often fascinated by the intimidation and destruction done by giant paws belonging to giant furry characters.