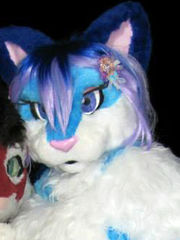 Patsy (a.k.a. Patsy Purrfect) is a Brazilian furry and fursuiter. Her fursona is an overweight blue and pink cat.

Born in São Paulo, Brazil, lives with her husband, who is also furry and fursuiter Danny.

She is admirer of fursuiting art.

Her first appearance was at Invasion Furry furmeet in 2013 and in 2014 he founded along with other furries and fursuiters the Furboliche Bowling event. In january 2016, Patsy helped creating Brasil FurFest, first hotel-based furry convention of Brazil. Patsy is also a staff of Megaplex since 2018.